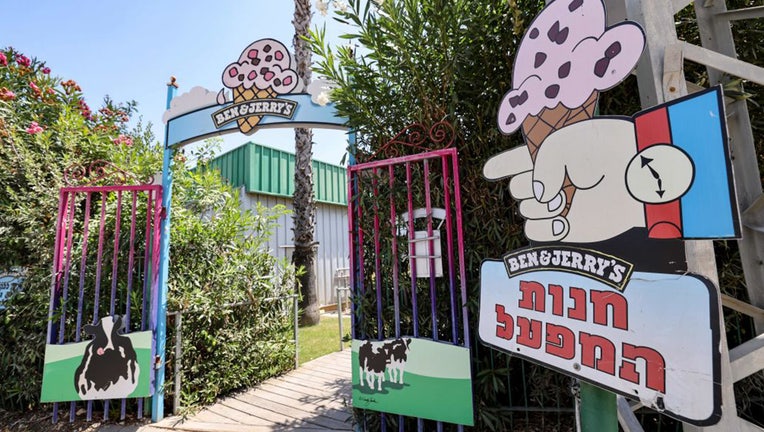 FILE - A view of the entrance of the ice-cream shop inside the Ben & Jerry's factory in Be'er Tuvia in southern Israel, on July 21, 2021. (EMMANUEL DUNAND/AFP via Getty Images)

A federal judge on Monday rejected a request by Ben & Jerry’s to block a plan by its corporate parent to allow its products to be sold in east Jerusalem and the occupied West Bank against the wishes of the Vermont ice cream maker's independent board of directors.

In his three-page decision, Carter said that the harm Ben & Jerry’s was claiming was "too speculative."

Ben & Jerry's spokesman Sean Greenwood said Monday that the company had "no new position for us to share at this time."

Ben & Jerry’s complaint in the case filed last month outlined the company's tradition of social activism over its 44-year history, including opposition to U.S. nuclear weapons spending in the 1980s, and in the 1990s, supporting LGBTQ+ rights and farmers.

That activism continued after it was purchased by Unilever in 2000 with the focus on, among other issues, migrant justice and climate change. In the aftermath of the 2020 death of George Floyd, Ben & Jerry’s became an advocate for Black Lives Matter.

Last year Ben & Jerry’s independent board said it was going to stop selling its ice cream in the Israeli-occupied West Bank and contested east Jerusalem, saying the sales in the territories sought by the Palestinians are "inconsistent with our values."

Earlier this year, Unilever announced that it was selling its business interest in Ben & Jerry’s in Israel to its Israeli licensee, which would market the products with Hebrew and Arabic labels.

In its suit, Ben & Jerry's argued the move by Unilever "poses a risk" to the integrity of its brand. Ben & Jerry's also claimed the deal violated the 2000 acquisition agreement that allowed Ben & Jerry’s to continue its progressive social mission independent of business decisions made by Unilever.

An email sent to Unilever was not immediately returned Monday, but the company has said in the past it did have the right to the sale and that, "The deal has already closed."

While the 2000 acquisition agreement allowed the Ben & Jerry's board to make decisions about the company's social mission, it stipulated Unilever would have the final word on financial and operational decisions.