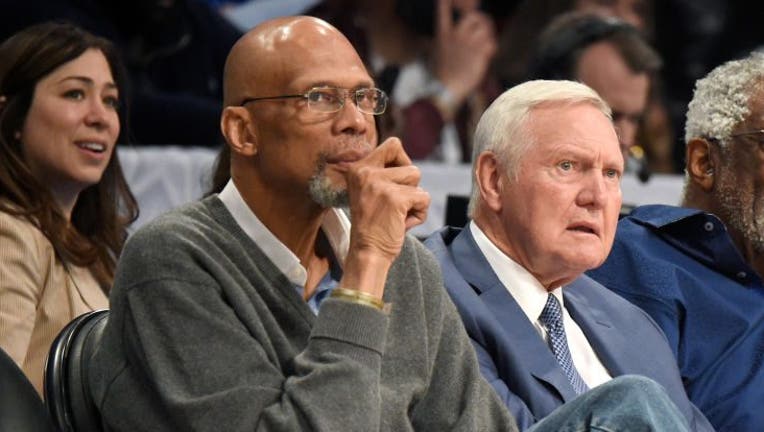 LOS ANGELES - Jerry West and Kareem Abdul-Jabbar were among former Los Angeles Lakers personnel who expressed their displeasure over their depictions in the HBO series "Winning Time: The Rise of the Lakers Dynasty."

West’s lawyers, in a statement to ESPN, said he demanded a retraction over the depiction which allegedly describes him "as an out-of-control, intoxicated rage-aholic." West seeks a retraction within two weeks of the letter to producer Adam McKay and HBO.

"The portrayal of NBA icon and L.A. Lakers legend Jerry West in 'Winning Time' is fiction pretending to be fact -- a deliberately false characterization that has caused great distress to Jerry and his family," West’s attorney Skip Miller said in the letter. "Contrary to the baseless portrayal in the HBO series, Jerry had nothing but love for and harmony with the Lakers organization, and in particular owner Dr. Jerry Buss, during an era in which he assembled one of the greatest teams in NBA history."

"Jerry West was an integral part of the Lakers and NBA's success. It is a travesty that HBO has knowingly demeaned him for shock value and the pursuit of ratings. As an act of common decency, HBO and the producers owe Jerry a public apology and at the very least should retract their baseless and defamatory portrayal of him."

HBO didn’t immediately respond to Fox News Digital’s request for comment. The show is based off the New York Times bestseller "Showtime: Magic, Kareem, Riley, and the Los Angeles Lakers Dynasty of the 1980s" by Jeff Pearlman.

According to ESPN, the letter also included support for West from Abdul-Jabbar, Michael Cooper, Jamaal Wilkes and former Lakers employees such as Mitch Kupchak who later became the team’s general manager.

"Instead of exploring his issues with compassion as a way to better understand the man, they turn him into a Wile E. Coyote cartoon to be laughed at," Abdul-Jabbar says. "He never broke golf clubs, he didn't throw his trophy through the window. Sure, those actions make dramatic moments, but they reek of facile exploitation of the man rather than exploration of character."

Abdul-Jabbar added in a separate SubStack post the characters are "crude stick-figure representations that resemble real people the way Lego Hans Solo resembles Harrison Ford. Each character is reduced to a single bold trait as if the writers were afraid anything more complex would tax the viewers’ comprehension."

Kupchak added he never saw West "lose his temper with anyone."

Johnson told TMZ Sports back in March he had no plans to watch the series.

Jason Segel, who plays Lakers coach Paul Westhead on the show, told The Hollywood Reporter it’s "not a docuseries" and believed the show was "made with a ton of love."

Pearlman also defended the series in a Twitter thread on Tuesday.