March 11, 2021 marks 10 years since an earthquake triggered a tsunami and a nuclear crisis in Japan. (Source: FOX)

TOKYO (AP) - Japan fell quiet at 2:46 p.m. Thursday to mark the minute that an earthquake began 10 years ago, setting off a tsunami and nuclear crisis that devastated the country’s northeast coast in a disaster that one survivor said he fears people are beginning to forget.

Carrying bouquets of flowers, many walked to the seaside or visited graves to pray for relatives and friends washed away by the water. Emperor Naruhito and Prime Minister Yoshihide Suga were among those observing a moment of silence at a memorial in Tokyo. Dignitaries and representatives of the survivors spoke — but most watched the ceremony online or on television because of restrictions to slow the coronavirus pandemic.

The magnitude-9.0 quake that struck on March 11, 2011 — one of the biggest on record — triggered a wall of water that swept far inland, destroying towns and causing meltdowns at the Fukushima Daiichi nuclear plant.

The days following the quake were terrifying for many in Japan and farther afield, as hydrogen explosions released radiation into the air and technicians worked furiously to try to cool the plant’s nuclear fuel by pumping in seawater. There were concerns and confusion about the extent of meltdowns, and how far radiation might travel, including fears that Tokyo and even the U.S. west coast were at risk. Officials said they were not, but panicked shoppers as far away as China and Russia scrambled to stock up on goods they thought would protect them.

More than 18,000 people died, mostly in the tsunami, and nearly half a million people were displaced. The government recognizes another 3,700 — mostly from Fukushima prefecture — who died of causes linked to the disaster, such as stress.

Ten years on, more than 40,000 people are still unable to return home, and areas near the wrecked plant are still off-limits due to contamination from the initial radiation fallout. Many in Japan have said that the country’s intense focus on physically rebuilding has at times ignored other healing that needed to be done. 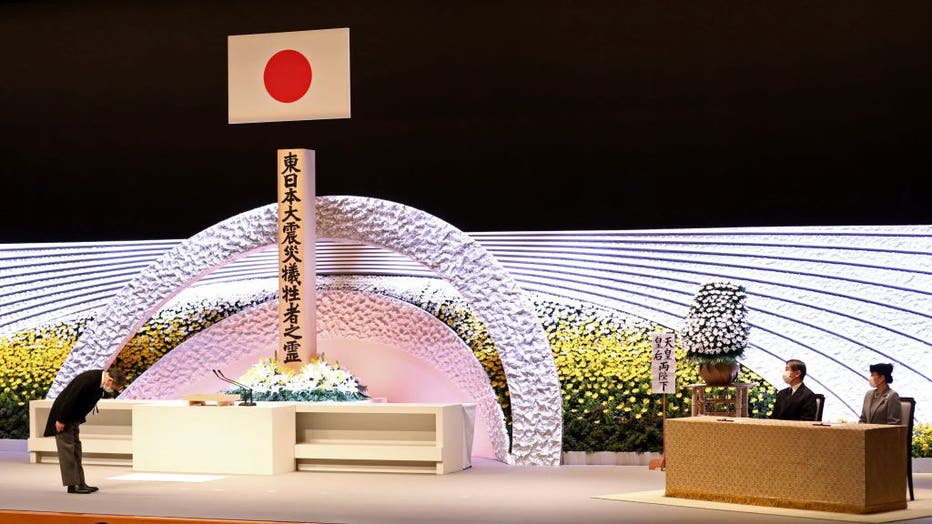 Japan's Prime Minister Yoshihide Suga (L) bows to Emperor Naruhito (C) and Empress Masako (R) in front of the altar for victims of the March 11, 2011 earthquake and tsunami at the national memorial service at the National Theatre of Japan on March 11

"Reconstruction in disaster-hit areas has moved forward significantly, but recovery of the survivors' hearts is not making as much progress as we wish," Makoto Saito, a teacher at an elementary school in Minamisoma who lost his 5-year-old son Shota in the tsunami, said in a speech at the Tokyo ceremony.

The government has said this is the last year it will organize a national commemoration for the disaster. Saito, representing Fukushima survivors, said that he is afraid memories are fading outside the disaster zone and he is committed to preventing that from happening by continuing to recount the lessons from the disaster and telling the stories of his son.

Naruhito said "my heart aches" when he thinks of those who have struggled to adapt to drastic changes to their lives because of the triple disaster, including the loss of loved ones, jobs and whole communities.

"I also consider it important to heal emotional scars and watch over the mental and physical health of those afflicted, including the elderly and children," he said. He stressed that it's important for people to stand by them and help reconstruct their lives "without leaving even a single soul behind in this difficult situation."

In Tokyo’s posh shopping district of Ginza, pedestrians stopped to observe the moment of silence as in previous anniversaries. But a memorial concert at the nearby Hibiya park, which has drawn many people in past years, was held online this year due to the pandemic and attracted only a small audience.

Beyond Tokyo, many marked the day by raising awareness for disaster prevention. In Kyoto, authorities conducted emergency drills.

Roads, train lines, houses and other key infrastructure have mostly been rebuilt in the disaster-hit region at the cost of more than 30 trillion yen ($280 billion). But no-go zones remain in parts of Fukushima, where shops and houses were abandoned and cordoned off and massive amounts of radioactive waste from decontamination pile up. Swaths of empty land remain in coastal towns farther north in Miyagi and Iwate prefectures, which were already seeing people move away before the disaster and have seen that trend accelerate.

In Otsuchi town in Iwate prefecture, where the tsunami destroyed the town hall, killing about 40 employees, families in dark suits gathered on a piece of empty land where the building used to stand. In Ishinomaki, Miyagi prefecture, dozens of residents prayed at a cenotaph carrying the names of more than 3,000 victims.

In Rikuzentakata, another Iwate city where a tsunami as high as 17 meters (56 feet) killed more than 1,700 residents, dozens of police officials wearing orange life vests combed the coastline in search of remains of those who have not been found — an effort that is still repeated in many towns every month. The remains of a woman found in February were returned to her family on Tuesday.

No deaths have been confirmed directly from the radiation, but Fukushima has fallen behind in the recovery efforts, with pieces of land totaling 33,000 hectares (81,500 acres) in seven towns near the nuclear plant still classified as no-go zones. Securing the nuclear fuel, dismantling the reactors and decontaminating the plant is an unprecedented challenge, with some questioning after 10 years of work whether it can be done.

But the president of Tokyo Electric Power Co. Holdings, which ran the plant, said in a statement Thursday that the company is determined to continue the cleanup and help develop jobs and businesses related to that process.

"We do not consider the 10th anniversary a breaking point, and will never let the Fukushima Daiichi accident fade," Tomoaki Kobayakawa said.

Suga has said the Olympics will showcase Japan’s recovery from the disaster and will be proof of human victory over the coronavirus pandemic. Some survivors, however, say the recovery is not yet done.