The National Weather Service will examine the damage to confirm if a tornado actually touched down and how intense the storm system was.

The storm left thousands without power. Trees were toppled, roofs ripped, cars flipped over and debris has been scattered along roads.

Emergency crews say there are six blocks worth of damage to businesses and homes on Woodland Blvd.

Volusia County Mike Chitwood joined FOX 35 on a tour of the storm damage.

The Florida Highway Patrol shared video on Twitter of a box truck overturning amid the possible tornado.

The tweet said: "Video from inside a box truck that overturned, after being in the middle of a possible tornado this afternoon, in Deland. The driver was taken to the hospital with bumps and bruises. You never know when weather can turn your life upside down. #ArriveAlive"

Storms left devastating damage behind in Volusia County on Tuesday.

There were also reports of downed trees and powerlines.

Volusia County Sheriff Mike Chitwood tweeted about the storm damage on Pine Street and the surrounding area in DeLand.

FOX 35 Viewer Brandi Gross gave us permission to use her video. The video shows deteriorating conditions as the storm causes the sky to get darker and the thunder and rain to kick in.

FOX 35 Viewer Brandi Gross gave us permission to use her video. The video shows deteriorating conditions as the storm causes the sky to get darker and the thunder and rain to kick in.

FOX 35 Viewer Carmel Bardin sent us this photo of a tree that fell down on her car in a parking lot on Stone Street in DeLand. She said no one was inside the car when the tree fell.

MORE NEWS: Forecasters watching 3 systems in the Atlantic, one has 'high chance' of becoming next named storm 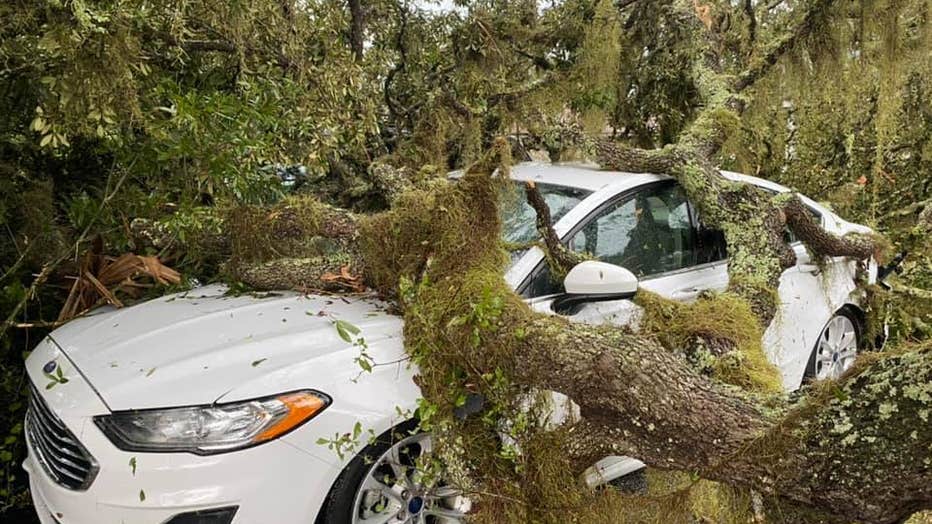 The Volusia County Sheriff's Office and DeLand Police Department tweeted that they are working together to reunite families that may have been separated during the storm or can't find one another amid the extensive damage.

The City of DeLand posted on Facebook that the damage seems to be contained to a northern section of DeLand, north of Plymouth Avenue both east and west of North Woodland Avenue.

Officials say, so far, there are no reports of any injuries.

Melissa Brissey was inside her ice cream shop when the storm came through. She told FOX 35 that "I looked outside and literally saw the tornado. It was right out here and was swirling huge coming this way."

Thankfully, she said she was able to make it safely outside. She saw cars flipped over and powerlines down everywhere. Her sign and her fence were also damaged.

"I prayed 'Lord please keep us safe. Thank you for your angels.' Everything calmed down, it was 45 seconds, I swear. Maybe 3 to 5 minutes," she added.

A team of FOX 35 reporters was in the area where the storm left the most damage.

FOX 35 reporter Jessica Albert was out there on Wednesday morning and spoke to several people impacted by the storm.

“Life won’t ever be the same, you know,” Debbie Cassidy of Deland said. “It was such a nice neighborhood.”

Several people rode out the storm in their homes, including Debbie Cassidy.

“We just watched,” Cassidy said. “We could see the wind and it was just going in all kinds of directions.”

Some neighbors tell FOX 35 they had to spend the night somewhere else after the storm passed because their homes were destroyed. When they came back to the damage in the morning, they couldn’t believe what they were seeing.

“We had very little structural damage to our house,” Cassidy said. “But the trees all the trees, we had huge trees in the back and now they’re in the front yard. It was amazing. It was really terrifying.”

The storm not only ripped up trees, but it also swept up several shed on these properties. Neighbors said the winds carried them so far, one of them ended up in a tree high above.

“It’s a lot,” Jesse O’Neil of Deland said. “I’m looking for all the parts of my motorcycle right now. If anyone sees an awning for a camper let me know. It’s somewhere in Deland.”

Neighbors are focusing on recovery now.

A car was left resting on its roof, trees were uprooted and streets littered with debris after a powerful storm and possible tornado caused widespread damage in DeLand, Florida, on August 18.

“I don’t even know where to start to be honest,” O’Neil said. “There’s a lot. I don’t know if cleanup is the right word. Maybe try to sort through and find things.”

They are thankful though that no one was hurt. Cassidy told FOX 35 that “All I know is I prayed harder that 5 to 10 minutes than I’ve ever prayed in my life and the Lord got us through."

Residents are cleaning up after a likely tornado struck DeLand.

On Tuesday evening, the Red Cross deployed its Disaster Action Team to connect with residents and provide emergency assistance to those in need.

Director of Community Information for Volusia County Government Kevin Captain said in a news release just after 8 p.m., in part: "Over 11,000 homes and businesses are without power. Duke Energy is mobilizing regional resources in the efforts to promptly restore power. County and city public works crews are clearing trees and roads. The American Red Cross is set up at the Lowes on International Speedway Boulevard in DeLand providing meals, water and tarps."

Captain said affected residents in need of sheltering assistance or food and basic supplies should visit the Red Cross, which is stationed at the Lowe's parking lot, located at 303 E. International Speedway Blvd., in DeLand. They will be there until 6 p.m. on Wednesday.

Affected residents will be asked to provide proof of residence. 26 residents so far have been provided with emergency financial assistance.

Meteorologists with the National Weather Service (NWS) confirmed on Wednesday afternoon that an EF-2 tornado did touch down in north DeLand.

They said that it moved northeast over the city, along a 4.6 mile path beginning at N. Minnesota Avenue and N. Ridgewood Avenue near the West Minnesota Estates neighborhood. It lifted just east of the Lake Lindley Subdivision between Jacobs Road and Lake Talmadge Drive.

There are no reported injuries or fatalities, the NWS added. The most significant damage was said to be along E. Washington Avenue between N. Alabama Avenue and N. Amelia Avenue, just east of Highway 17.

They said that two homes had roof loss, with several others have roof and structural damage. Many healthy tree trunks were found snapped and twisted near the base and vehicles, including a box truck, were even overturned.

A large funnel cloud was seen in DeLand, Florida, on August 18 as a possible tornado caused widespread damage in the region.

FOX 35 Chief Meteorologist Glenn Richards says that this is only the 19th EF-2 tornado to occur in the month of August in Florida, dating back to 1950.

City officials held a news conference about the significant damage on Wednesday afternoon.

Severe storms and a tornado moved through DeLand on Tuesday afternoon.

During the news conference, they confirmed that 73 structures were impacted by the tornado. 28 of those had cosmetic damage. 15 homes and 9 businesses had just minor damage. Then, 14 hours, one multi-family home, and five businesses had major damage. There was also one home completely destroyed.