A 103-year-old Holocaust survivor and 1918 pandemic survivor got his second dose of the COVID-19 vaccine.

Ireland became the latest country Sunday to pause use of AstraZeneca’s COVID-19 vaccine following reports of blood clots in some people, though health authorities continue to have no evidence the vaccine was responsible.

Ireland’s National Immunisation Advisory Committee said their decision to defer administering AstraZeneca’s vaccine came after four new reports of blood clots in adults under 65 who got the AstraZeneca vaccine.

Ireland’s Health Minister Stephen Donnelly tweeted Sunday the decision was a "precautionary step" based on new information from Norway, another country that recently paused use.

More than 117,000 doses of AstraZeneca’s COVID-19 vaccine have been given in Ireland so far, health officials said.

The European Medicines Agency has said it is looking into the reports but that vaccinations should continue in the meantime. Further information is expected from the EMA this week.

Meanwhile, Ireland marks the latest country to pause its use awaiting further research.

Denmark was the first to temporarily halt the AstraZeneca vaccine Thursday after reports of blood clots in some people. The Nordic nation's health authority said the decision was "based on a precautionary principle" and that one person who developed a blood clot after vaccination had died.

Norway, Iceland and Bulgaria followed suit and suspended use of the Anglo-Swedish company's vaccine, which was developed with the University of Oxford.

"Until all doubts are dispelled and experts guarantee that it holds no risk for people, we are stopping immunization using that vaccine," Bulgarian Prime Minister Boyko Borissov told a Cabinet meeting. He said that the suspension will last until the European Medicines Agency issues a written statement that it is safe.

Thailand and Congo have also delayed use of the vaccine, pending an investigation, while Italy and Romania stopped using shots from one particular batch. Austria has also halted use of doses from a single, but different, batch.

That decision followed the death from blood clots of a 49-year-old 10 days after she had been vaccinated, and the hospitalization of a 35-year-old woman. Experts concluded neither complication was related to the vaccine, and Austria's chancellor said Friday that he, himself, would be willing to receive the shot "to show that I have trust in this vaccine."

"Experts here have a clear opinion and this vaccine is being used in many countries around the world, and it is already being used by tens of millions," Sebastian Kurz said. 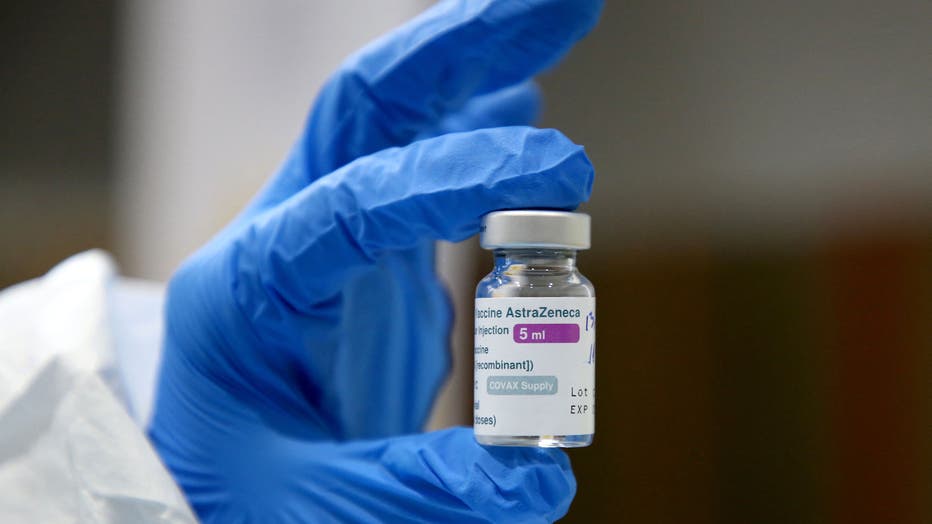 A medical worker holds a vial of the AstraZeneca Covid-19 vaccine at a school gym in Tirana on March 13, 2021. (Photo by Gent SHKULLAKU / AFP) (Photo by GENT SHKULLAKU/AFP via Getty Images)

In fact, nearly every country that issued a suspension acknowledged that it had no evidence the vaccine had caused the blood clots. Health experts have pointed out that the people most likely to currently be receiving COVID-19 vaccinations are also more likely to have other health problems, which could put them at higher risk for blood clots.

Germany, France, Poland and Nigeria, meanwhile, said they would continue using the AstraZeneca shot even as national regulators investigate.

The suspensions were the latest trouble for AstraZeneca, which had a public spat with the European Union earlier this year over supply delays and which also faced concerns about its efficacy in older adults. While EU regulators approved it for use in all adults, some countries have set age restrictions — though many are now lifting those. The trouble also comes as many EU countries have struggled to quickly ramp up vaccinations.

Despite the bumpy rollout, the vaccine is still expected to be critical to the global inoculation program because it’s cheaper and easier to store than many others — and because the global initiative to get vaccines to poorer countries known as COVAX relies heavily on the vaccine.

The European Medicines Agency, which authorized the shot for use across the 27-nation EU, Iceland, Liechtenstein and Norway in January, said "the vaccine’s benefits continue to outweigh its risks and the vaccine can continue to be administered" while a closer evaluation of the blood clot cases continues.

"There is currently no indication that vaccination has caused these conditions," the regulator said Thursday. It said the number of people with blood clots in vaccinated people was no higher than those who hadn’t been inoculated.

The World Health Organization said the same, but added that it would assess the reports though it didn’t expect any changes to recommendations based on current evidence.

The EMA did say, separately, that product information for the AstraZeneca vaccine should be updated to note that cases of severe allergic reactions have been reported.

The suggested update is based on a review of 41 reported cases of anaphylaxis, or severe allergic reactions, that were identified among 5 million people who received the AstraZeneca vaccine. In a statement on Friday, the Amsterdam-based agency said it concluded that "a link to the vaccine was likely in at least some of these cases."

Such allergic reactions are a recognized rare side effect to numerous vaccines and have been reported for other COVID-19 shots, including the one made by Pfizer and BioNTech.

Currently, the AstraZeneca COVID-19 vaccine has not been approved for emergency use in the United States. The U.S. is administering Pfizer and BioNTech’s two-dose shot and J&J’s one-dose shot.

This story was reported from Detroit. The Associated Press contributed