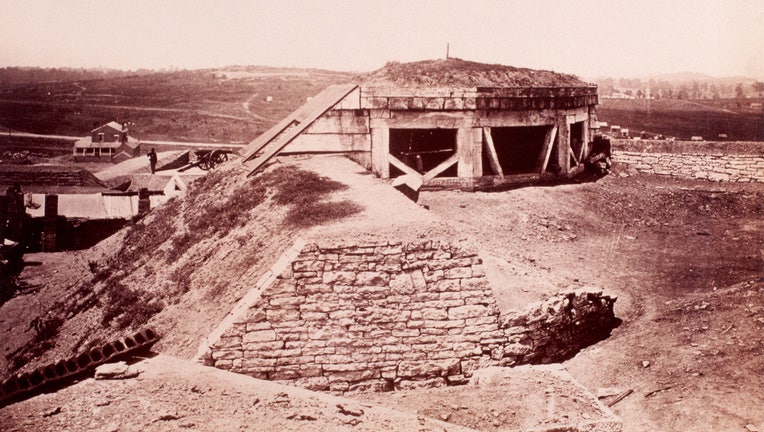 NASHVILLE, Tenn. - A developer has unearthed human remains that could be two centuries old while digging to lay the foundation of a new Nashville project not far from a Civil War fort and a cemetery dating back to 1822.

For Nashville, the discovery marks the latest intersection of economic boom times and the city's rich and sometimes troubled history — where new amenities sprout up on or near lands where people long ago settled, battled or toiled, then died and were buried, often with little record of their final resting places.

In a court petition earlier this month, AJ Capital Management noted that the discovery occurred in the neighborhood near Fort Negley while the company was working on its Nashville Warehouse Co. mixed development, which will include apartments and business space.

The fort, built by runaway slaves and freed Black people for the Union, has become a flashpoint in recent years in Nashville's long journey from a hub of the old Confederacy to a vibrant, modern city trying to cope with rapid growth. It sits about a half-mile away from the multi-building project, which is partially completed and flanked by a giant guitar sign and a construction crane in a quickly developing neighborhood with businesses, bars and restaurants.

The company is asking a Nashville chancery judge for permission to move the remains, which include skeletal pieces and thin wood fragments thought to be from coffins, to the adjacent, 200-year-old Nashville City Cemetery.

An archaeologist hired by the company wrote that her team discovered remains in May and again in June, describing them as not of Native American origin and "estimated to date to the early nineteenth century," potentially putting them before the Civil War.

The archaeologist wrote that they are likely "isolated burials and not a more extensive cemetery distribution," saying the remains were only found in two out of 53 4-by-6-foot excavations done to work on the foundation. Both were found at about 15 feet below ground, give or take a few feet. State archaeology officials, local police and the county medical examiner's office were notified.

A portion of each burial and the remains was unexposed and preserved in place, the archaeologist wrote.

A spokesperson for AJ Capital did not respond to a request for additional comment.

Who these potentially centuries-old people might have been is an open question, according to Learotha Williams, a Tennessee State University professor who specializes in African-American, Civil War and Reconstruction studies.

He wouldn’t rule out that the remains could be Native American, from early settlers, from Civil War soldiers or from Black workers on the fort — though that seems less likely, since there was evidence of coffins, he said, and that was a level of respect not typically afforded to Black people at that time.

Williams said he would feel "a whole lot more comfortable having maybe an academic unit come in" to study the area where the remains were found. He described Nashville's "spotty record" of sorting out friction between growth and historic preservation.

Williams did say things are "changing a bit" but there's still "a ways to go" when it comes to Nashville's sensitivity toward histories of marginalized people.

Most prominently, an effort several years ago to build up the area right by Fort Negley drew enough scrutiny that it was shelved because it was later found that the lands below likely were burial grounds.

Adjacent to the fort, developers had planned to build a housing and entertainment complex where Nashville's former minor league baseball stadium had sat, near the foot of the fort.

After opposition grew, the city ordered an archaeological study that in January 2018 determined that human remains are likely still buried there, possibly of enslaved people who built the fort.

The plans were halted, and instead the city envisioned a park commemorating the fort and the people forced to build it. The city has demolished the baseball stadium and has been holding public meetings about the overhaul. A final draft of a master plan is expected to be released this summer.

After Confederate forces surrendered to Union soldiers in Nashville in 1862, the Union took more than 2,700 runaway slaves and freed Black people from their homes and churches and forced them to work on the fort, where they lived in "contraband camps." Although they were promised money for their labor, few were paid. About 600 to 800 of them died.

The fort deteriorated over the years. The Works Progress Administration rebuilt it in 1936 and it reopened in 1938, but the fort fell into disrepair again. The Ku Klux Klan rallied there in the Jim Crow years, and segregated softball fields were later built nearby, according to the late author Robert Hicks.

The new development where the remains were found this year is further away from the fort, across a set of railroad tracks from where the baseball stadium sat.