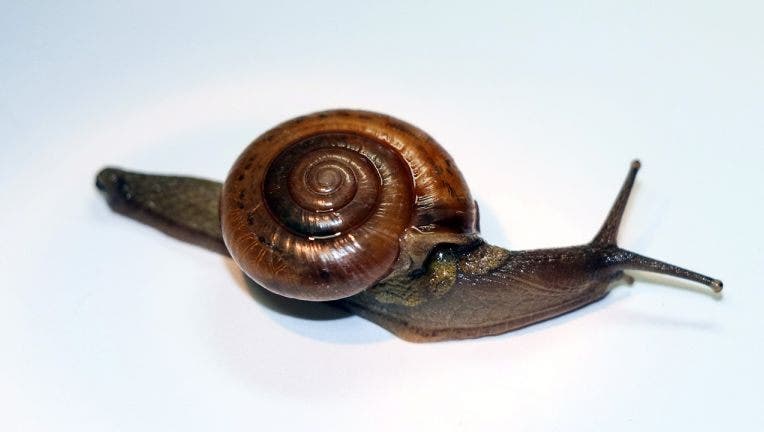 TALLAHASSEE, Fla. (AP) - Florida, a state that encourages people to kill non-native iguanas, pythons, and lionfish, has a new invasive species to worry about: the horntail snail, which has never before been found in the United States, according to the Department of Agriculture and Consumer Services.

The department warned Floridians on Thursday about the dime-sized snail that is a pest in India. Commissioner Nikki Fried issued a news release saying they voraciously eat a wide variety of crops, including lettuce, beans, and yams. It is also a health risk to humans.

“This is the first U.S. record,” said Trevor Smith, the department’s director of the Division of Plant Industry. “That’s kind of par for the course here in Florida. We average two to three new U.S. records a month in Florida for exotic arthropods, snails, or plant pathogens. Everybody is aware that Florida is the hot spot, but they’re usually thinking Burmese pythons, things like that, where the much greater number of things coming in are actually snails and insects and plant pathogens.”

The snail was found by a gastropod enthusiast in Miami, who sent it to the University of Florida, which identified it. The department then gathered about 30 of the snails in urban Miami and began studying them and watching them reproduce. While the department has killed many of the gastropods while researching how to eradicate them, the initial harvest has grown to about 400 snails in quarantine.

“We brought the initial population in. That will be our research population. Everything else dies,” Smith said.

He said the snails previously have been intercepted at ports, but this is the first time it’s been found roaming properties in Florida.

And while inspectors look for pests in produce, Smith said the snails can also cling to other materials like stone, tile, and marble.

And despite their small size, they eat a lot.

“It will eat hundreds of different plants,” Smith said, adding that researchers have watched quarantined horntail snails eat. “You put a head of lettuce in there and they will go to town on that lettuce. It will be gone in hours. Voraciously feeders for sure.”

And they reproduce quickly. Smith said the snails lay an average of about 20 to 30 eggs at a time and can lay eggs up to 30 times a year.

“Snails are really well designed, and this one, in particular, to spread and adapt and become invasive, so that’s why we jumped on this one so quickly. As soon as we found it, we quarantined the area,” he said.

The department has also been trying to eradicate giant African land snails in the same area, and Smith said the tools they’ve used in that effort will help them with the horntail snail.