People living near Lake Jesup in Central Florida are feeling the effects of Hurricane Ian, delayed by a few days.

OVIEDO, Fla. - People living near Lake Jesup in Central Florida are feeling the effects of Hurricane Ian, delayed by a few days.

The storm raised water levels in lakes and rivers all across Oviedo, and those bodies of water are now spilling over and flooding neighborhoods. One man FOX 35 New spoke with says he’s lived in the area for 50 years and has never seen things look as bad as they did Monday night. 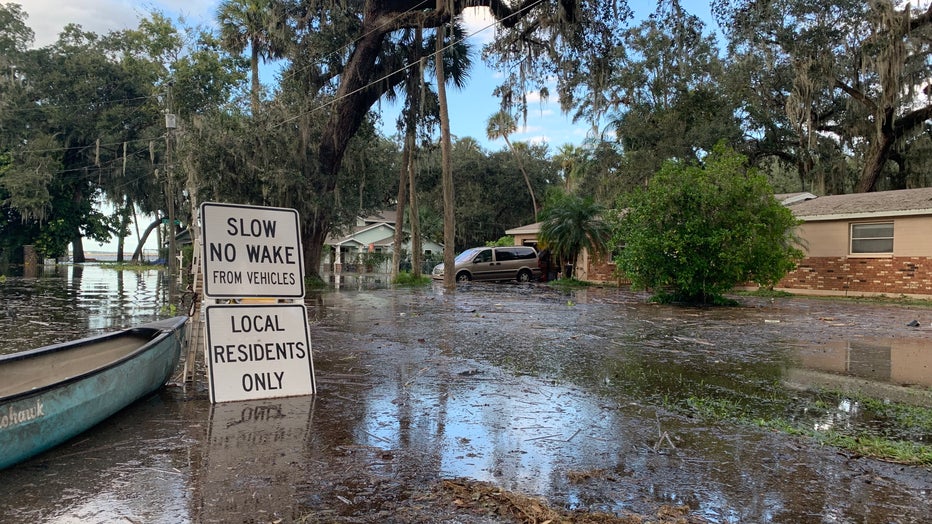 A man named Don Kinch walked through waist-high water to show FOX 35 crews what his home was up against.

"This is the worst I’ve seen it," Kinch said. "The road curves down closer to the lake over here, and a lot of people now as of yesterday started getting water in their houses. But the day before, when the storm came in, it was down about where that boat was."

The house where Don Kinch lives is raised up on blocks, so he’s avoided flooding up till now.

But he isn’t sure how much longer he’ll make it.

"If it stops tomorrow, which it’s supposed to crest and stop coming up, we’ll be all lucky. If it don’t, I’m going to have to pack my stuff and get out of here."

People aren’t sure what to do – or what will happen next.

And it isn’t just the water the people living here have to worry about; several said they’d spotted gators and snakes that normally hang out around the lake.

But now the lake has come up to their homes.

"Normally we see gators and snakes and all kinds of wildlife, but they don’t come up in here. Now they’re hunting for food," said Kinch.

Many of the homes surrounding Lake Jesup flooded after Hurricane Irma five years ago. FOX 35 reported on some homeowners deciding to rebuild their homes on stilts after that.

But now, at least two of those raised homes are inaccessible because of the flooding.

One of the other things that make this particular flood so difficult is that the rest of the area has moved on back to normal life after the hurricane. For instance, a woman in a house that’s getting very close to flooding is a teacher and had to go to work today.