BRANDON, Fla. - A Hillsborough County deputy is expected to make a full recovery after being shot by a suspect who barricaded himself in a Brandon home for seven hours Friday as deputies pleaded with him to surrender peacefully.

After the ordeal was over, Hillsborough County Sheriff Chad Chronister told the public what happened when two deputies responded to a call from an elderly woman who said a man in her house had assaulted her.

The Friday morning 911 call was from a woman who said 48-year-old James Allen Jackson hit her on her pacemaker, her face, and on the side of her head. When deputies got there, Jackson was locked in one of the back bedrooms.

The two deputies' body-worn cameras showed an elderly man and woman in the home. The woman, who was said to be Jackson's mother, went to the door of the room where Jackson was allegedly barricaded.

Deputy Adriel Gonzalez approached the door and asked Jackson to come out and talk. Jackson said something unintelligible to Gonzalez, who responded "Say again?" before a single shot was fired through the door.

Jackson's mother screamed as Deputy Gonzalez fell to the floor. The other deputy in the room called over his radio that a shot was fired and an office was down.

Deputy: AJ, where you hit?

Gonzalez: In my right arm.

Deputy Gonzalez was able to run out of the home. The other deputy crouched in the kitchen before making sure the elderly man and woman got out of the home. All four of them ran to a nearby sheriff's office vehicle. Once they were safe, the deputy called for SWAT backup.

For the next seven hours, Chronister said negotiators made more than 200 calls to Jackson, who was walking through the house with a gun, talking irrationally. Chronister said deputies deployed gas into the home, eventually making Jackson uncomfortable enough to exit. 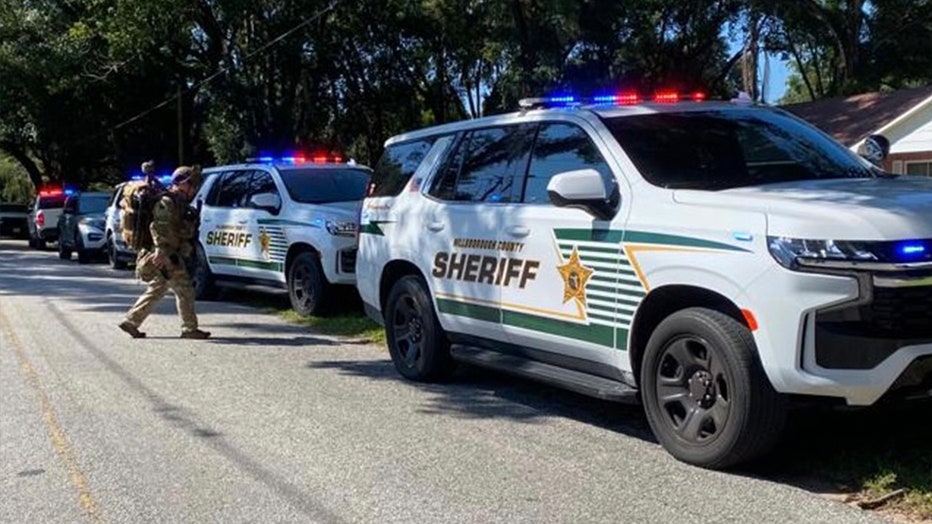 "He came out the same way he was throughout this entire process, he was holding a gun, the firearm he used to shoot one of our deputies. Throughout the seven hours of negotiation he had the same firearm in the same hand," said Sheriff Chad Chronister.

Chronister said Jackson would not drop his gun and took an aggressive stance, which drew fire from a SWAT officer. Jackson was hit twice in the torso and was in surgery Friday night.

As for the deputy, Chronister says Gonzalez's ballistic vest stopped the bullet from penetrating his vital organs.

The sheriff's office said Jackson did not have a criminal history but had been taken into custody under the Baker Act four separate times.

Deputies were at the house on September 11 because Jackson was involved in an argument with a neighbor, but nothing warranted criminal charges. After the incident, though, family members went to a judge to try to get Jackson Baker Acted involuntarily, which was denied, according to Chronister.

Jackson is being charged with two counts of attempted murder of a law enforcement officer and two counts of domestic violence on an elderly person.