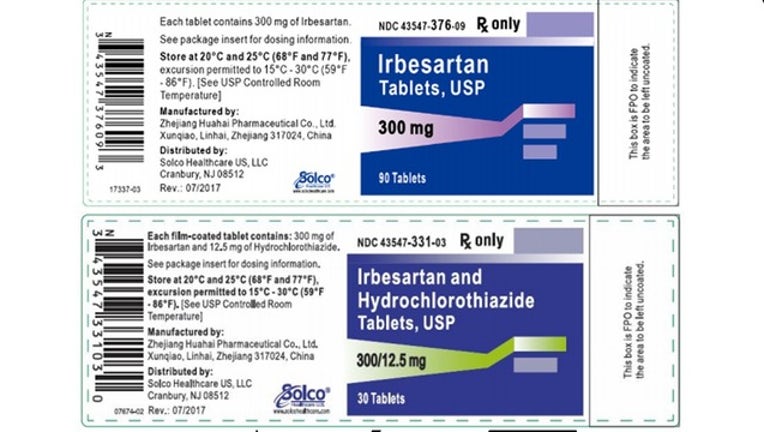 Prinston Pharmaceutical Inc. has initiated a voluntary recall of one lot of Irbesartan and seven lots of Irbesartan HCTZ tablets to the consumer level due to the detection of trace amount of unexpected impurity found in an active pharmaceutical ingredient.

Prinston is only recalling the lots of Irbesartan products containing N-nitrosodiethylamine (NDEA) above the acceptable daily intake levels released by the FDA. NDEA is classified as a probable human carcinogen as per the International Agency for Research on Cancer (IARC) classification.

Prinston says that they have not received any reports of adverse events related to this recall.

RELATED: Chicken nuggets recalled after consumers find wood in them

Prinston says that patients should contact their pharmacity of physician, who can advise them about an alternative treatment prior to returning their medication. Those on Irbesaratan should continue taking thier medication until their pharmacist provides a replacement or their doctor prescribes a different medication that treats the same condition.

To see the exact lot numbers recalled and when they were distributed, visit the Prinston Pharmaceutical Inc. website.

Prinston's Irbesartan and Irbesartan HCTZ were reportedly distributed ntaionwide to wholesale, distributor, repackager, and retail customers. Distributors and customers are being contacted immediately to discontinue distribution of the specific lots being recalled and to notify their sub accounts.