2nd accuser claims Herschel Walker encouraged her to have an abortion

The woman spoke via Zoon during a press conference hosted by her attorney. Walker, a U.S. Senate candidate in Georgia, has denied previous allegations.

ATLANTA - A second woman alleged Georgia Senate candidate Herschel Walker encouraged her to have an abortion when she says she became pregnant during a relationship with him.

Attorney Gloria Allred said she is representing the woman, who spoke anonymously during a press conference Wednesday via Zoom.

Republican Senate candidate Herschel Walker says a second woman who has come forward claiming he pressured her to have an abortion, is lying. It's another major blow to the Senate hopeful who has campaigned on his strict pro-life stance.

"Well that's a lie, and I've said that's a lie, and I hope people can see that Raphael Warnock and the left will do whatever they can to win this seat back," Walker said. "I'm not gonna stop, this seat is too important to scare me or force me out of this seat ‘cause they're not. I hope people saw after that debate who's the guy ready to represent the people of Georgia while Raphael Warnock is there to represent Joe Biden."

When pressed on if Walker knew the woman, he doubled down.

"What I'm saying is this is a lie. I've said it once, and I've moved on, and my campaign has moved on because we're worried about what the Georgia people are talking about," he said. "What I'd say to those voters is that if you're hesitant about voting for me, think about what Raphael Warnock and Joe Biden have done in less than two years."

2nd woman claims Herschel Walker encouraged her to have abortion

The woman's attorney said she thinks voters have the right to know her story. Walker has taken stances in favor of restricting abortion during his campaign.

"The reason I am here today is because he has publicly taken the position that he is ‘about life’ and against abortion under any circumstances when, in fact, he pressured me to have an abortion and personally ensured that it occurred by driving me to the clinic and paying for it," Jane Doe said.

Allred presented exhibits she claimed were evidence of Walker's relationship with her client. She said her client decided to come forward weeks before the 2022 midterm election because she feels "voters have the right to know," evaluate their evidence and make their own decision.

The press conference comes weeks after the mother of one of Walker's children claimed that the Georgia Republican paid for her abortion while they were dating in 2009. 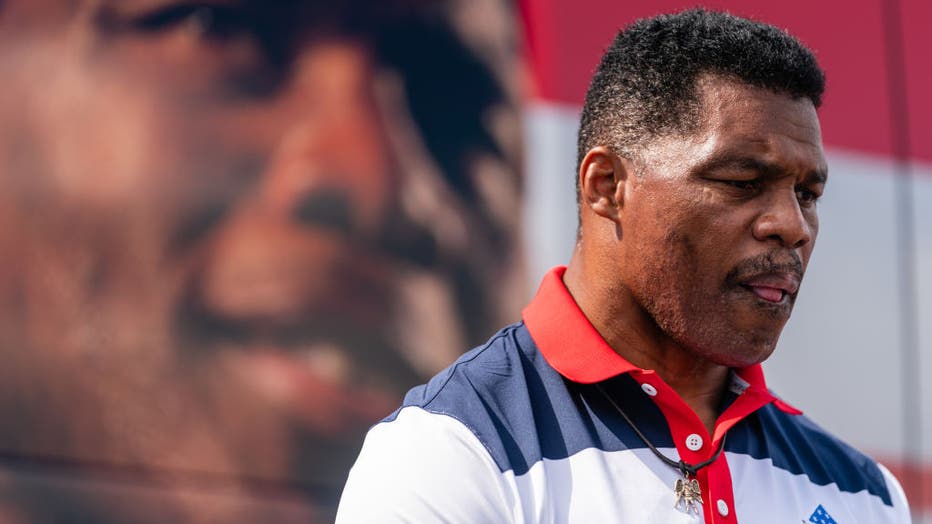 Walker, who has expressed support for a national abortion ban without exceptions, called the accusation a "flat-out lie" and previously said he did not know who the woman could have been.

Abortion has continued to be a central issue in the Georgia race, one of the most competitive Senate contests in the country. Walker and Democratic Sen. Raphael Warnock are locked in a tight contest that is key to the balance of power in the U.S. Senate.

Earlier this year, after a story by The Daily Beast, Walker acknowledged the existence of three children he had not previously talked about publicly.

Republican U.S. Senate candidate Herschel Walker responds to an article in The Daily Beast, which claims he paid for a girlfriend's abortion in 2009. Walker has stated during his campaign that he is pro-life and believes all abortions should be banned.

The woman told The Daily Beast that Walker’s denial of the abortion was somewhat surprising to her.

"Sure, I was stunned, but I guess it also doesn’t shock me, that maybe there are just so many of us that he truly doesn’t remember," the woman said. "But then again, if he really forgot about it, that says something, too."

In The Daily Beast report, the news outlet said it reviewed a receipt showing her payment for the procedure, along with a get-well card from Walker and her bank deposit records showing the image of a $700 personal check from Walker dated five days after the abortion receipt.

During the Republican Senate primary, Walker openly backed a national ban on abortions with no exceptions for cases involving rape, incest or a woman’s health being at risk — particularly notable at a time when the 1973 Roe v. Wade Supreme Court precedent had been overturned and Democrats in Congress had been discussing codifying abortion rights into federal law.

During a debate with opponent Raphael Warnock in Savannah, Walker said a moderator misstated his position on a "national ban," which he said matches Georgia’s state law banning abortion at about six weeks.