Authorities are investigating after what has been described as anti-Semitic flyers were found at the University of Central Florida.

ORLANDO, Fla. - Flyers described as being anti-Semitic in nature were plastered all over the University of Central Florida campus earlier this month, according to authorities. It’s the second case of alleged anti-Semitism UCF police officers have had to investigate in the last month-and-a-half.

The flyers, posted in response to a bill aimed at denouncing anti-Semitism in schools, reads, “Florida Jews Attack Campus Free Speech.”  It has left some in the UCF Jewish community uncomfortable.

The flyer calls out House Bill 741, which was passed in May. The bill denounces anti-Semitism, saying anti-Semitism at schools must be handled the same way racism is. The flyer says the bill restricts “legitimate criticism of Israel and the role of Jews in the United States.” 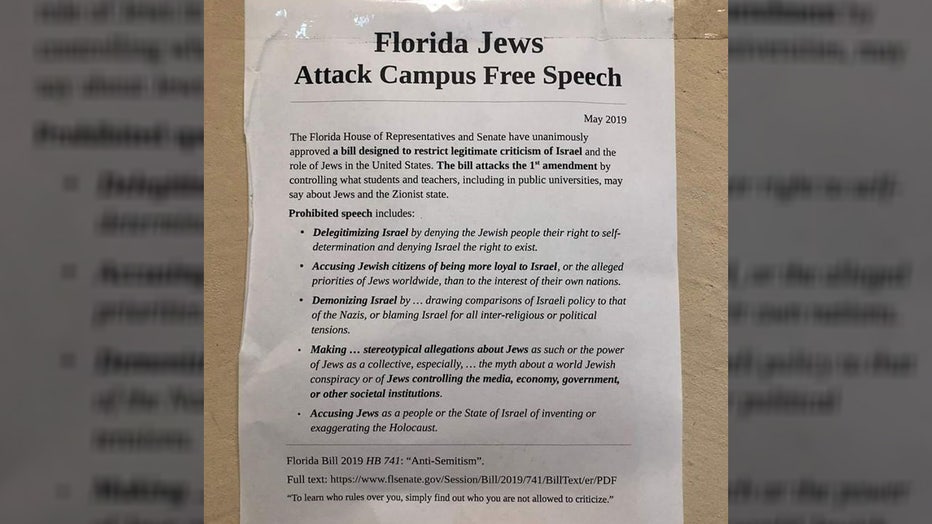 “It’s exactly the sort of anti-Semitic screed that the bill is intended to address,” said the sponsor of the bill, Rep. Randy Fine, R-Palm Bay.

“Anytime you say that we have to have a discussion about the evil impact of Jews in our society, everything you say after that’s absolutely irrelevant. They had no point other than they are bigoted, hateful people,” Fine said.

Jonah Keehn runs Knights for Israel, a student club at UCF that supports peace in Israel. He says campus police removed the flyers shortly after they were posted. He doesn’t think students made them.

“I think it was just a targeted attack by neo-Nazis who are just trying to isolate Jews,” he said.

Other anti-Semitic flyers were posted on a Chabad sign near campus last month, concerning Jewish students like Keehn.

That’s exactly why Rep. Fine pushed the bill in the first place.

“In a world of rising anti-Semitism, we have to take a strong stand against this,” he said.

The UCF Police Department says it is aware of the flyers and is actively investigating. The department sent FOX 35 a statement, which read, “Hate has no place at UCF.”