A monument honoring the Groveland Four was unveiled in Lake County on Friday.

TAVARES, Fla. - A monument honoring the Groveland Four was unveiled in Lake County on Friday.

It was a historic day on Friday in Lake County, as a new memorial honoring the Groveland Four was unveiled.

Florida Governor Ron DeSantis made remarks about his mission to right a wrong by pardoning the men for a crime they did not commit.

It has been 70 years since four African-American men were wrongly accused and convicted of raping a woman in 1949. Known as the "Groveland Four," Charles Greenlee, Walter Irvin, Samuel Shepherd, and Ernest Thomas are now immortalized.

The plan for the memorial began shortly after an official pardon by Gov. DeSantis. 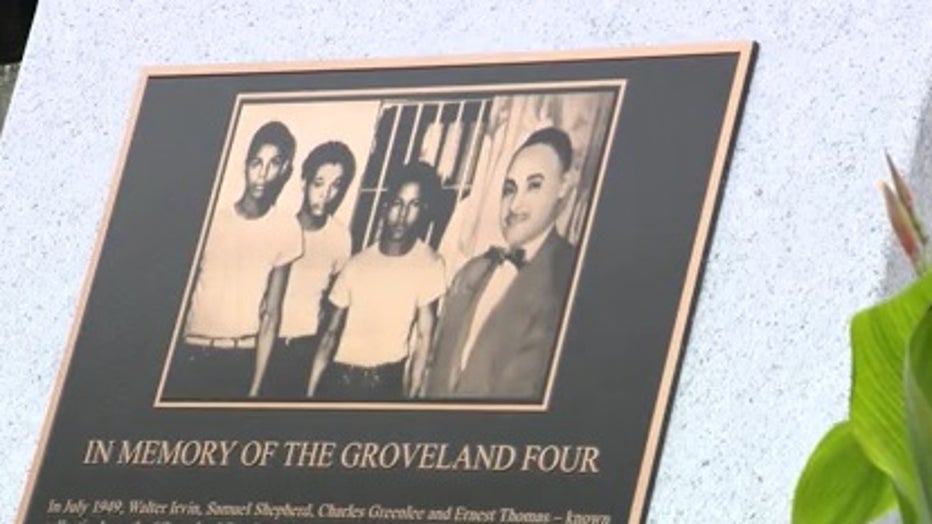 “This monument today will further serve as recognition of the miscarriage of justice that occurred in this case and will represent proof of Lake County’s commitment for equal justice and a commitment to do better going forward,” DeSantis said.

One of the men was killed shortly after the arrests. The others were convicted and two of them were sentenced to death. Their names are now cleared due to the pursuit of equal justice. Family members present at the unveiling spoke out about their legacy.

“We have always known of Walter’s innocence,” Gerald Thread said of Walter Irvin.

Historians who have written about their stories shared the truth at the unveiling.

“Not a notorious or desperate criminal among them,” Gary Corsair said.

Rep. Geraldine Thompson promised their memory won’t end with a pardon and is pushing lawmakers to issue a full exoneration.

“This monument says we will not tolerate the kind of injustice that the Groveland four suffered,” Thompson said.

The families agreed that the pursuit of a full exoneration will continue to help rectify the Groveland Four injustice.