There are more calls for school resource officers to be removed from schools after a video surfaced of a deputy user a Taser on a Lake County student.

TAVARES, Fla. - There are more calls for school resource officers to be removed from schools after a video surfaced of a deputy user a Taser on a Lake County student.

The Sheriff's Office is backing that deputy but some people say he went too far.

Several groups came out on Monday to argue that no matter what the circumstance, a student should never be tasered in school. Gathering outside the Lake County School board building, people made sure their message was seen and heard.

"I saw her fall to the floor, and I wanted to jump through the screen and protect her, help her do something. Nobody did nothing!" said Tyquandra Alrasul El Bey, of the SOUL Sisters Leadership Collective.

It happened about two weeks ago at Eustis High School  The Lake County Sheriff's Office says the 15-year-old girl hit the deputy multiple times before he used the Taser. The teenager was then arrested.

Justice groups from around the state have called the incident unacceptable.

"It was not okay at all for a grown man...who had weapons on him, to put his hands on her at all. It was not okay and no one can justify it at all," said Aryana Brown, a former Lake County student. 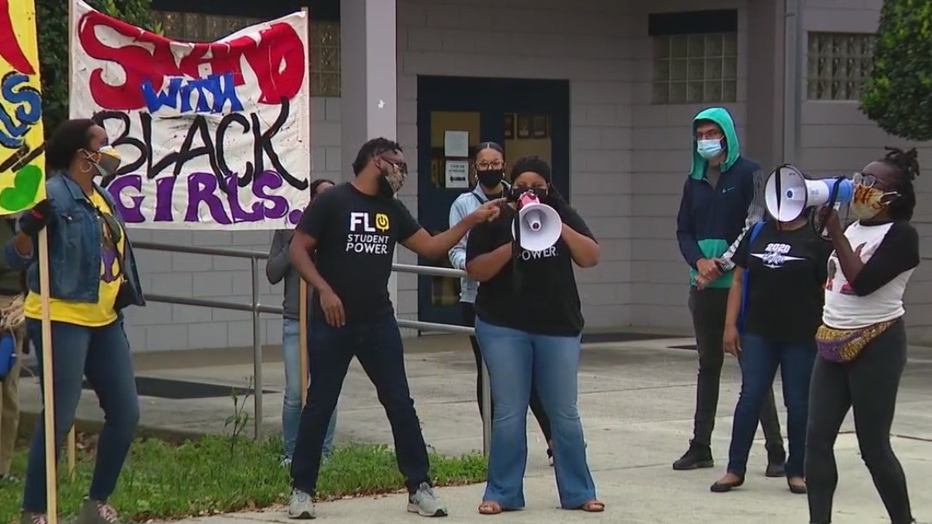 But the Sheriff's Office says the deputy's actions were justified. They say the Taser was a last resort.

"Even during the incident itself, when the deputy was trying to ward off her punches, he was trying to still t verbally de-escalate her," said Sgt Fred Jones, with the Sheriff's Office.

The girl later apologized to the deputy.  Jones says removing resource officers from schools would be a mistake.

"We prevent things from happening. We prevented weapons from a ban on campus. I've broken up fights where I've taken weapons off kids, you know? I think I prevented kids from going to the hospital," said Jones.

Several of the people at the rally also spoke in front of the Lake County School Board on Monday. One board member pointed out that he believes there is strong community support to keep deputies in schools.