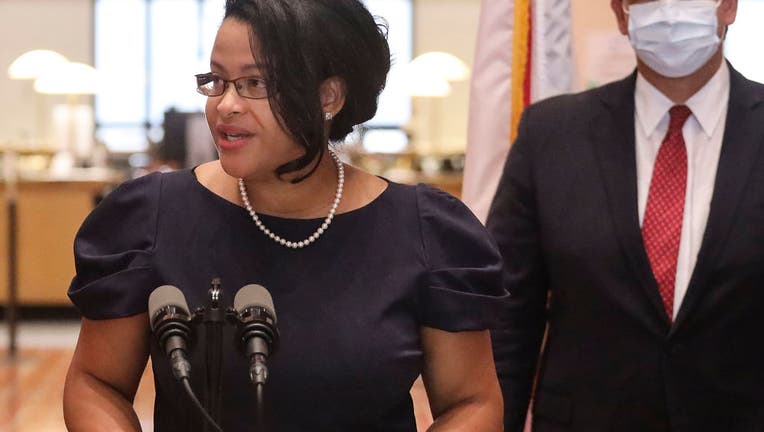 Renatha Francis, left, a Palm Beach County circuit judge, gives her remarks after being appointed by Gov. Ron DeSantis, right, to the Florida Supreme Court during a news conference on Tuesday, May 26, 2020, inside the Miami-Dade Public Library main b

The Republican governor announced Francis’ appointment to the conservative-controlled Supreme Court at a news conference in West Palm Beach. Francis is scheduled to join the court on Sept. 1, replacing retiring Justice Alan Lawson.

In a short speech, Francis, who was born in Jamaica, said she is the "epitome of the American dream" and described her judicial philosophy with a reference to U.S. founding father Alexander Hamilton.

"The Florida Supreme Court protects the people’s liberty, and inherent in the way we do that as a judiciary, is by respecting and observing the limited role that judges play in our constitutional system of government," she said.

"Alexander Hamilton explained what that meant, that we exercise neither force nor will but merely judgment, we apply the law as written. This timeless principle in a civil society not only promotes uniformity, predictability; it’s essential to preserving liberty. It restrains arbitrariness. It restrains abuses of power."

DeSantis tried to appoint Francis to the court in 2020 but her appointment was nullified by the Florida Supreme Court under a provision of the state constitution requiring justices to be members of the Florida Bar for at least 10 years. At the time of her previous appointment, Francis was four months shy of the 10-year requirement.

Her appointment on Friday came a day after DeSantis suspended the elected state prosecutor in Tampa for pledging not to enforce a new law banning abortions after 15 weeks. The governor referenced the suspension at the beginning of the news conference Friday, comparing the prosecutor’s pledge to "judges that have taken power away from people’s elected representatives and have legislated from the bench."

"Our government here in the United States and in the state of Florida is supposed to be what’s called a government of laws, not a government of men," he said. "And what the founding fathers meant by that is that it’s not one individual who gets to impose a will outside the context of a constitutional system, but that the best way to preserve our freedoms is have a society that is based on the rule of law."

Francis operated a bar and trucking company in Jamaica before moving to the United States as an adult and working her way through law school. She has been a judge in Palm Beach County since 2019 and was previously a judge at the Miami-Date County Court.