FOX 35 meteorologist Kristin Giannas has a look at the tropics.

ORLANDO, Fla. - A massive cloud of Saharan dust is starting to move through Florida with size and concentration that experts say hasn’t been seen in half a century.

FOX 35 meteorologist Kristin Giannas says the dust arrived at the Sunshine State on Thursday morning and will stick around through much of the weekend, giving us some beautiful sunrises and sunsets. 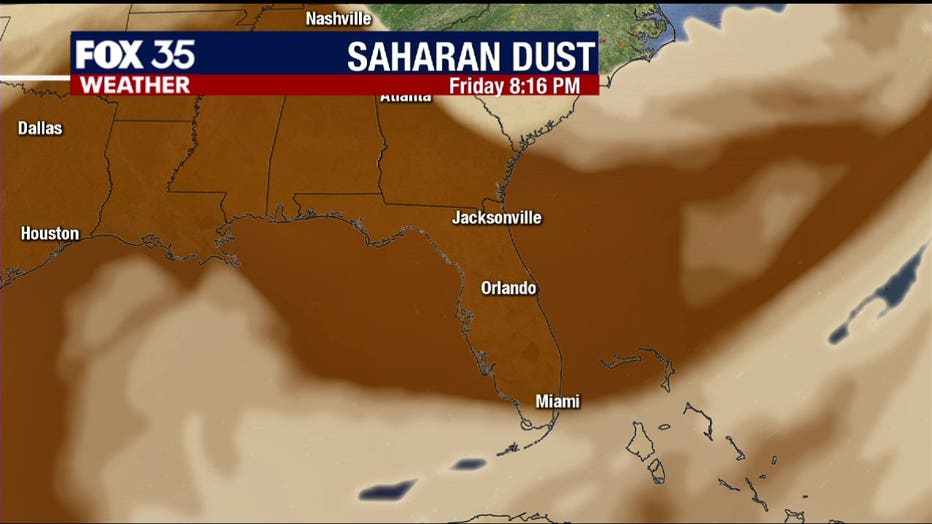 Air quality across most of the Caribbean fell to record “hazardous” levels and experts who nicknamed the event the “Godzilla dust cloud” warned people to stay indoors and use air filters if they have one.

A vast cloud of Sahara dust is inching closer to the U.S. with size and concentration that experts say hasn’t been seen in half a century.

“This is the most significant event in the past 50 years,” said Pablo Méndez Lázaro, an environmental health specialist with the University of Puerto Rico. “Conditions are dangerous in many Caribbean islands.”

The National Oceanic and Atmospheric Administration (NOAA) said the plume was first captured on June 7, blowing west off the African continent over the Atlantic.

Frank Marks, director of the Hurricane Resarch Divsion at NOAA's Atlantic Oceanagraphic and Meteorological Laboratory, says that these plumes are frequent in the summer, especially in June and July, and take about 10-12 days to cross the Atlantic.

This dust is expected to stretch from Florida to the Gulf Coast to as far west as Texas, before turning back eastward.

RELATED: Massive Saharan dust plume reaches US — here’s what you need to know

Although much of the dust remains above the surface and causes hazy skies and colorful sunsets, it can aggravate those with respiratory issues.

A Saharan dust plume traveling across the Atlantic Ocean reached the Caribbean on June 22, with the dense cloud darkening the sky over Barbados.

However, this is not likely to cause major deterioration in the air quality for the U.S. at large, since the dust is elevated and concentrations are continually and gradually dissipating. Additionally, water vapor present in the South will wash away dust particles.

According to NOAA, this dry layer of air usually travels about one mile above the ocean surface. The extremely dry air can inhibit tropical cyclones and activity.

FOX News and the Associated Press contributed to this report