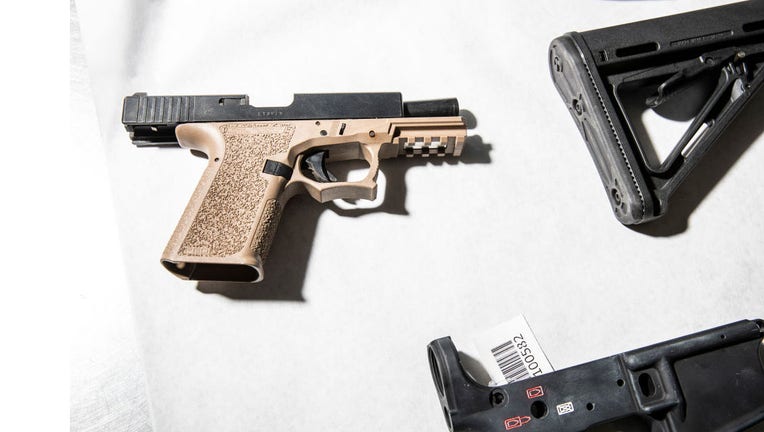 A semi-automatic pistol is seen among a sample of ghost guns seized by the Oakland Police Department. (Stephen Lam/The San Francisco Chronicle via Getty Images)

WASHINGTON - The popularity of ghost guns is becoming a growing problem nationwide based on the easy access for consumers to purchase and make them. The homemade guns are untraceable and unregulated by the government.

What are ghost guns?

Ghost guns are homemade firearms that are purchased online and can be made for under $500. The guns lack serial numbers used to trace them and are unregulated by the government. The guns can also be bought without a background check. FOX 10 Phoenix reports it’s illegal to buy an assembled ghost gun, but, it’s legal to buy the parts needed to create one.

RELATED: 'Ghost guns' were made with 3D-printed parts, NYPD says

The rapid production of ghost guns and easy access to them has led to the arrests of people in multiple cities. In New York, police arrested a man who built ghost guns from parts he ordered online and created at home using a 3D printer, FOX 5 New York reported Wednesday. Authorities seized a handgun and a rifle built with 3D-printed parts. According to police, the suspect had enough parts to build at least seven ghost guns.

NYPD Chief of Intelligence Tom Galati told FOX 5 New York Wednesday that in 2019, the department recovered 47 ghost guns. In 2020, 150 ghost guns were seized. In 2021, 375 ghost guns were collected and so far this year, authorities have confiscated 85 ghost guns.

In April 2021, Philadelphia police arrested a suspect who was spotted by a crime camera displaying a ghost gun on a local street. In another incident, investigators said a ghost gun with an extended magazine was taken from a female member of a local gang.

In Phoenix, a 16-year-old boy was shot after a fight reportedly occurred over a ghost gun purchase at Cesar Chavez High School on Nov. 29, 2021. The teen suffered a non-life-threatening injury. A 15-year-old student at Cesar Chavez High School was arrested in connection with the shooting. The teen injured in the shooting was facing charges at the time, FOX 10 Phoenix reported.

Last year, FOX 10 Phoenix reported on the circulation of ghost guns in the area and spoke to authorities about their efforts to get these weapons off the streets. According to FOX 10, police said their agency seized 30 ghost guns in 2020 and collected 31 in the first six months of 2021.

RELATED: 2 teens, including victim, may face charges in Cesar Chavez High School shooting, according to police

Sen. Chris Murphy, who represented Newtown, Connecticut when he was in the House at the time of the 2012 Sandy Hook Elementary School shooting, told gun control advocates and gun violence survivors on March 2 that President Joe Biden needed to prioritize addressing the problem of ghost guns.

Biden has pressed his administration to regulate ghost guns, which Murphy called "increasingly the weapon of choice by criminals in this country." But while the Justice Department has proposed new rules to crack down on them, the regulations haven't been finalized.

The president’s efforts have focused on pushing out funding to help police do better at getting guns off the streets, sending in some federal agents to help beleaguered departments. The Justice Department is also prioritizing gun cases that come from the "iron pipeline" on Interstate 95, where ghost guns are trafficked up and down the Eastern seaboard.

Biden has called on Congress to pass a ban on assault weapons and high-capacity magazines.