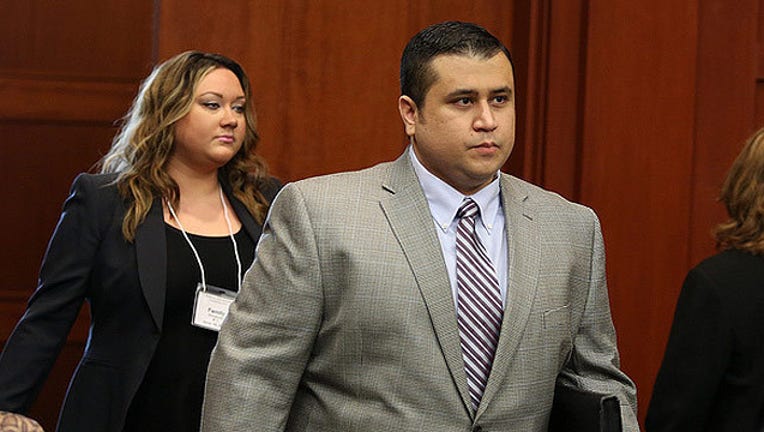 ORLANDO, Fla. (AP) - George Zimmerman's wife filed for divorce Thursday, less than two months after her husband was acquitted of murdering Trayvon Martin and a week after she pleaded guilty to perjury in his case.

Shellie Zimmerman made the decision because of "disappointment," her attorney, Kelly Sims, wrote Thursday in a short email to The Associated Press. The 26-year-old Zimmerman told ABC's "Good Morning America" last week that she was having serious doubts about remaining married.

The interview came just after she pleaded guilty to a misdemeanor perjury charge for lying during a bail hearing following her husband's arrest for the fatal shooting of 17-year-old Trayvon Martin in February 2012. Her husband, who was acquitted on second-degree murder and other charges in July, wasn't in the Sanford, Fla., courtroom as she was sentenced to a year's probation and 100 hours of community service - even though she supported him and lied about their finances.

George Zimmerman said he acted in self-defense when he killed Martin and the polarizing case opened up national discussions on self-defense laws and race. Martin was black. Zimmerman has a white father and Hispanic mother.

Shellie Zimmerman's felony perjury charge came after she lied about the couple's assets when her husband was trying to be released on a lower bond. If convicted, she had faced up to five years in prison and a $5,000 fine.

Court records show that in the days before the bond hearing in June 2012, Shellie Zimmerman transferred $74,000 - broken into eight smaller transfers ranging from $7,500 to $9,990 - from her husband's credit union account to hers. It also shows that $47,000 was transferred from George Zimmerman's account to his sister's in the days before the bond hearing. Amounts of over $10,000 would have been reported to the Internal Revenue Service.

Four days after he was released on bond, Shellie Zimmerman transferred more than $85,500 from her account into her husband's, records show. They also show that the jail recorded George Zimmerman instructing her on a call to "pay off all the bills," including an American Express and Sam's Club card.

Most of the money had come from donations to a website that had been set up to pay for George Zimmerman's defense.

Despite the large transfers, at the bail hearing, Shellie Zimmerman testified that the couple, who married in 2007 and had no children, had limited funds because she was a full-time student and her husband wasn't working. Prosecutors say they actually had then already raised $135,000 in donations from the website.

Shellie Zimmerman admitted to ABC that she did not tell the truth during the bail hearing.

"I can rationalize a lot of reasons for why I was misleading, but the truth is that I knew I was lying," she said.

She said she plans to do her community service with a Christian ministry.

"I've made mistakes and I want to own them right now," Shellie Zimmerman said.

During her appearance on "Good Morning America" following her husband's acquittal, Zimmerman refused to say if she and her husband were still together.

She added that she "wants to have children and stay married."

"With George?" the interviewer asked.

"That's something I'm going to have to think about," Shellie Zimmerman replied.

Earlier this week, her 29-year-old husband was ticketed for speeding in Lake Mary, Fla. Police say he was going 60 mph in a 45 mph zone.

In the ABC interview, she also revealed she wasn't at their home the night of Martin's shooting in their gated community outside Orlando because she'd had a fight with her husband.

"I was staying at my father's house," she said. "We had gotten into an argument the night before and I left."

Shellie Zimmerman says that while she believes her husband's version of the events leading to the shooting, "I can't tell you how many nights I've gone or laid awake at night just thinking that I wish to God the circumstances had been different."

She says the couple lived in hiding while awaiting his trial.

"We have pretty much lived like gypsies for the past year and a half. We've lived in a 20-foot trailer in the woods, scared every night that someone would go and find us and that it would be horrific," she said.

She also told ABC she is deeply sorry for the Martin family's loss. "I can't even begin to understand the grief a parent experiences when they lose a child," she said.