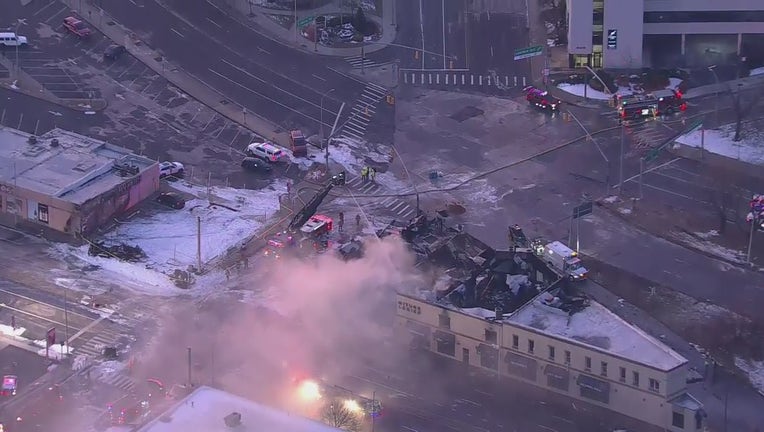 The roughly 13,000-gallon truck struck the empty store in Rockville Centre at about 1:15 a.m. and spread to another building and the street. The building later collapsed.  Videos posted to social media showed huge flames coming from the scene.

The crash is near the intersection of North Park, Lincoln Avenue, and Merrick Road.

"The fire had initiated starting in the old La-Z-Boy store and spread to the liquor store and other areas around it," Nassau fire chief Michael Uttaro said.

Investigators will spend the next few days trying to piece together exactly what happened in the moments leading up to the crash. Over 150 firefighters responded from more than 20 departments. The intensity of the fire caused wires and traffic lights to be knocked to the ground.

The flames also spread to the sewers and raised environmental concerns. The Coast Guard spent Wednesday morning surveying the area to identify where the spill got into the waterways.

Miraculously, no one was seriously injured in the inferno.

"We've trained for a scenario like this in Rockville Centre for 30 years," said Rockville Centre fie chief James Avondet.  "I've been talking about this and here we are - able to get it under control a short time with very few injuries."

The truck was believed to be the only vehicle involved in the crash.

The driver was able to escape the crash but was taken to a hospital, according to police.

Guests staying at Best Western hotel - just steps from where the crash happened were relocated to a nearby hotel.

"Guests were here, no lights, no hot water, nothing," said owner Kirit Panchamia.

And some 500 homes in the area, as well as stores along the normally busy corridor were also without power. Two nearby schools were closed for the day.

All lanes of Sunrise Highway were closed in both directions between North Centre Avenue and North Park Avenue but reopened on Thursday morning ahead of the morning commute.

A gasoline tanker truck slammed into a furniture store in Rockville Center, New York. The driver escaped the crash unharmed. Emergency crews are on the scene dealing with leaked gasoline.

An investigation into what led to the crash was underway.