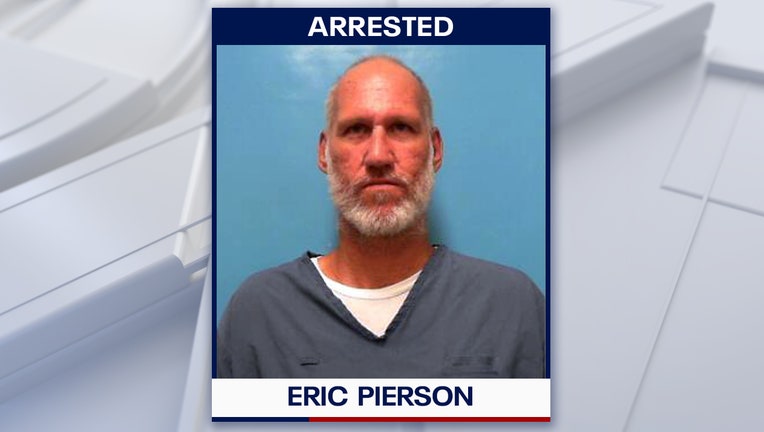 SUNRISE, Fla. - Police have charged a convicted murderer who was released from prison last year with the slaying of a South Florida woman whose body was found in a canal after being missing for three weeks.

Eric Pierson, 54, was charged Saturday with first-degree murder for the slaying of Erika Verdecia, 33, hours after her body was found Saturday near Fort Lauderdale. Sunrise police say Pierson confessed to stabbing the single mother four times with a screwdriver on Sept. 25.

Pierson had been released from prison in September 2020 after serving 27 years of a 40-year sentence for the 1993 beating and strangulation murder of 17-year-old Kristina Whitaker, whose death helped galvanize a push for longer prison sentences. He had pleaded guilty to second-degree murder.

Florida did away with parole after the slaying, requiring convicts to serve at least 85% of their sentences. But the change could not be applied retroactively and Pierson was still eligible, leading to last year's release.

In 1985, Pierson had broken into a home and slit a woman's throat. He served four years of an 18-year sentence for first-degree attempted murder before being paroled.

Verdecia's mother told the South Florida Sun-Sentinel she doesn't understand why Pierson was free to attack her daughter. Erika Verdecia leaves behind a 6-year-old daughter.

"Why is this guy in the streets? Why?" Carmen Verdecia told the newspaper. "He’s going to pay this time. We’re not going to stop until we see him in the electric chair."

Verdecia's family had reported her missing Sept. 27, three days after she left home and never returned. Her mother reached out to her friends on social media and one said she had seen Verdecia with a "grimy" man at a sandwich shop who told her his name was Eric Pierson.

Carmen Verdecia searched his name on the internet and was horrified to see newspaper stories about his earlier murder and attack.

"I flipped out," she said. "I told (police) my daughter was seen with a killer. And then they started looking for her. But it was too late."

Sunrise police said in court documents they had a brief interaction with Pierson and Verdecia during a Sept. 25 traffic stop — the day Pierson told detectives he killed her. She was a passenger in Pierson's truck and did not appear to be in distress, police said.

When police contacted Pierson again on Oct. 4, he told investigators that Verdecia had walked away when he stopped to get gas shortly after the traffic stop. He said he never saw her again. But surveillance video shows the pair had been at the gas station before the traffic stop, police said.

Police say they questioned the 6-foot-8 Pierson again on Friday. They say he let them search his truck and they found blood inside. His girlfriend later Friday called police to say he would stare at the canal behind her home and say, "Damn that bitch stinks." She told police he had also said, "If they don’t find a body, they don’t have a case."

The body was found hours later.