Helen Mountford, the vice president for climate and economics at the World Resources Institute, discusses the Paris Agreement, an accord that President Biden rejoined.

PARIS - France is offering its citizens the chance to trade their gas-guzzling vehicles for a 2,500 euro grant ($2,975.00) to buy an electric bicycle, according to reports.

Reuters reported on April 11 that lawmakers in France’s National Assembly approved a climate change improvement measure in a preliminary vote on April 10. The e-bike stipulation is part of an amendment to a climate bill aiming to reduce the country’s greenhouse emissions by 40% in 2030 from levels previously recorded in 1990.

The French Federation of Bicycle (FUB) Users told Reuters that if the measure is adopted, France would be the first country to offer people the chance to trade in their cars for an environmentally friendly bicycle.

"For the first time it is recognized that the solution is not to make cars greener, but simply to reduce their number," said Olivier Schneider of the FUB. 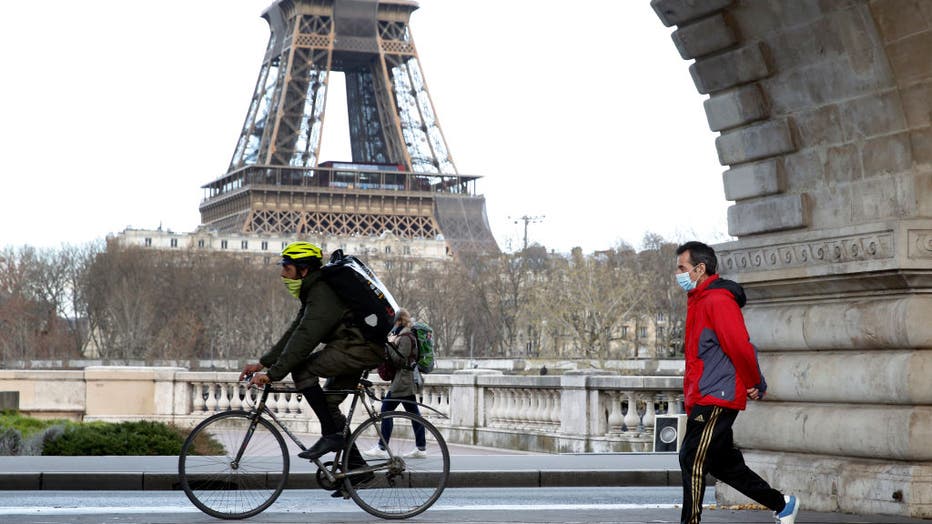 A man wearing a protective face mask and a cyclist pass near the Eiffel Tower before the curfew, which begins at 6 p.m, during the coronavirus disease (COVID-19) outbreak on March 15, 2021 in Paris, France.

Dozens of European lawmakers, business executives and union leaders on Tuesday urged the United States to cut its greenhouse gas emissions by 50% in the coming decade compared with 2005 levels.

Ahead of U.S. President Joe Biden's climate summit with world leaders next week, European officials and industry representatives called in an open letter for a trans-Atlantic alliance to tackle climate change and achieve a "just and sustainable transition" toward a low-carbon economy.

The suggested goal would almost double the target set by the Obama administration after it signed the Paris climate accord in 2015.

The European Union last year agreed to cut its emissions of carbon dioxide and other planet-warming gases by at least 55% by 2030 compared with 1990 levels.

Both Washington and Brussels are aiming to go carbon neutral by mid-century, a goal scientists say needs to be achieved to keep average global temperatures from rising above 2 degrees Celsius (3.6 Fahrenheit) by the year 2100.

The Paris accord's more ambitious target of capping global warming at 1.5 C (2.7 F) by the end of the century compared with pre-industrial times would likely require even more drastic worldwide cuts in emissions.

This story was reported from Los Angeles. The Associated Press contributed to this report.