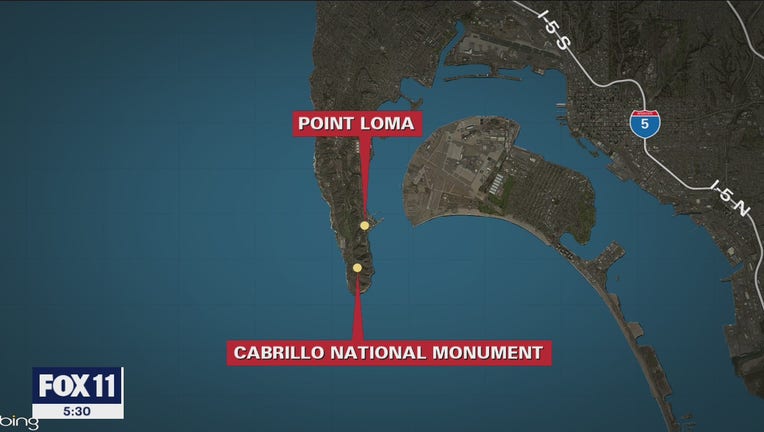 SAN DIEGO, Calif. - Three people were killed and at least 27 others were injured after a vessel overturned off the coast of San Diego during a suspected smuggling operation, officials said Sunday.

The incident happened just before 10 a.m. near the Cabrillo Monument in the Point Loma Peninsula, according to San Diego Fire-Rescue Department.

Crews responded to the area after receiving calls from people onshore of a boat in distress.

According to the fire department, 30 people were pulled from the water and three people died at the scene after crews attempted lifesaving efforts. Over two dozen were transported to local hospitals with various injuries. The victims died from drowning, hypothermia and/or injuries from the boat capsizing.

"The boat was on the reef bouncing back and forth and then just slowly disintegrated into a bunch of pieces. So there’s no boat there, it’s all debris," said Lifeguard Lt. Rick Romero.

He added that surf was about 5 to 6 feet high and water temperatures were roughly 60 degrees. Crews conducted seven water rescues and one cliff rescue.

It is still not known where the boat originated from but border patrol agents say it appears the boat was involved in illegal smuggling.

The captain of the boat is in custody.

"Crossing the border illegally is unsafe no matter the method, especially at sea. The smugglers really don’t care about the people they are exploiting, they just care about lining their own profit," said Jeff Stephenson with US Border Patrol.

He says they have seen a dramatic increase in smuggling operations recently.

According to Stephenson, smuggling vessels try to blend in with commercial vessels, so there was no indication this boat was being used for smuggling prior to the incident.

A multi-agency investigation is underway.