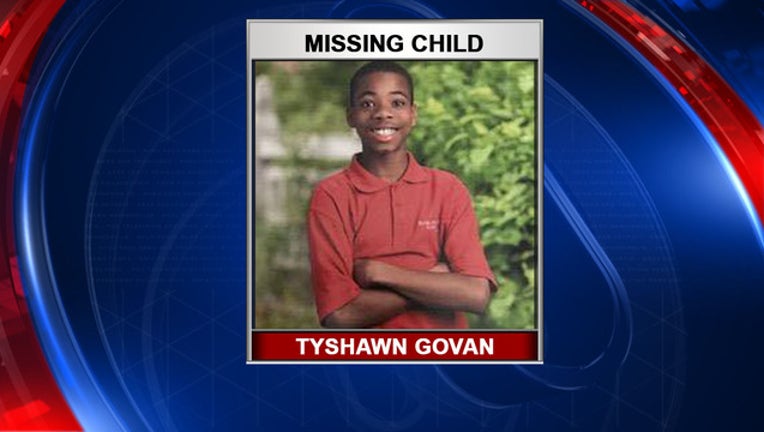 WESLEY CHAPEL (FOX 13) - UPDATE: Pasco County deputies say Tyshawn was located and is safe. No other details were immediately available

A Florida Missing Child Alert has been issued for a 12-year-old from Wesley Chapel.

Deputies in Pasco County began searching for Tyshawn Quadrek Govan after he went missing on Monday around 1:40 p.m. By Tuesday morning, the Florida Department of Law Enforcement issued a Missing Child Alert for him.

Govan was last seen in the area of his home in the 2200 block of Marsh View Drive in Wesley Chapel. The neighborhood is located off of State 56. He was last seen heading southwest from this location towards a running trail. Deputies say they don't suspect any foul play and there is no preliminary evidence indicating he was kidnapped.

Deputies say he got in trouble at school earlier that day. His parents told him to sit outside for a few minutes to think about what occurred. When his father went outside, he was gone.

Govan is described as a black male, 5’6 tall, weighing 110 pounds with black hair and brown eyes. He was last seen wearing a black t-shirt with a large Lebron James logo, blue jeans and black and white Jordan sneakers.