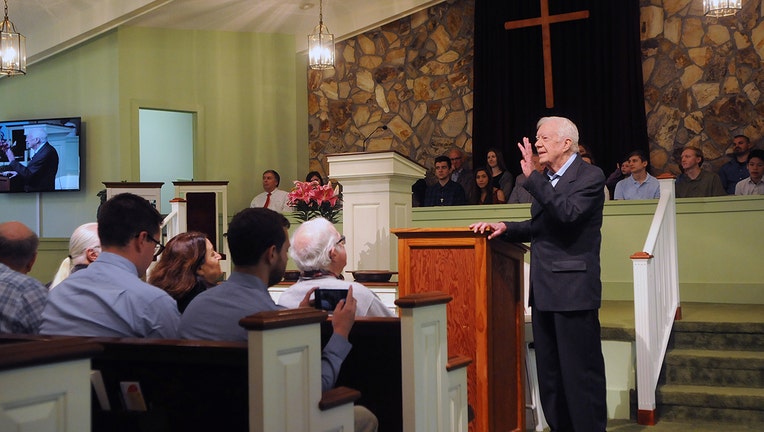 PLAINS, Ga. - Former President Jimmy Carter taught a Bible lesson on life after death Sunday less than two weeks after breaking his pelvis in a fall.

Using a walker, the 95-year-old Democrat slowly entered the crowded sanctuary at Maranatha Baptist Church in the southwest Georgia town of Plains.

"Morning, everybody," he said cheerfully.

With help, Carter sat on a motorized lift chair at the front of the room to teach a 45-minute lesson based on the Old Testament book of Job.

Referring to a cancer diagnosis that resulted in the removal of part of his liver in 2015, Carter said he was is "at ease" with the idea of dying and believes in life after death.

More than 400 people were on hand in the main hall and smaller, overflow rooms where the lesson was shown on television.

Carter was briefly hospitalized and has since been recovering at home since fracturing his pelvis on Oct. 21. He also fell shortly before that and needed stitches above his left eye.

Carter is the oldest U.S. ex-President ever and has been teaching Bible lessons since he was in his teens. He missed one Sunday school class after the pelvis fracture.

Rev. Tony Lowden said Secret Service agents, relatives and fellow church members all discouraged Carter from teaching because of the injury, but he insisted.

"He is pouring out that you might see Christ while he is suffering," Lowden told the crowd.

Carter remained for the worship service after teaching, sitting in a pew beside his wife, Rosalynn, and singing hymns with the congregation.

Referring to the former president and Jesus Christ by their initials, Lowden gave thanks for Carter in prayer.