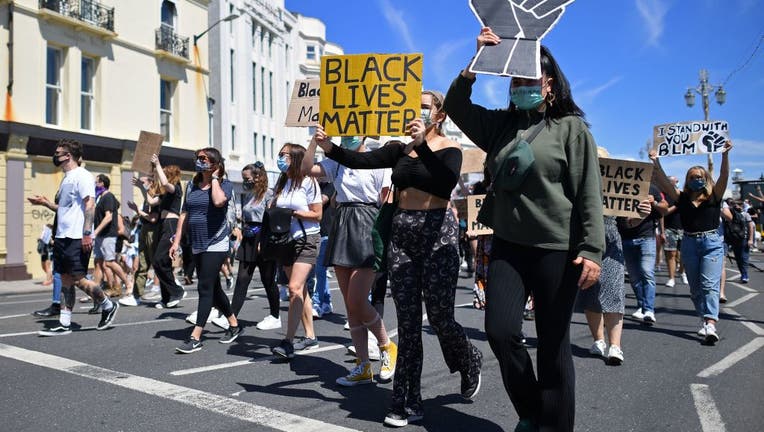 Protesters hold up placards as they march along the seafront in support of the Black Lives Matter movement at a protest action in England on June 13, 2020, in the aftermath of the death of unarmed black man George Floyd in police custody in the US. (JUSTIN TALLIS / AFP) (Photo by JUSTIN TALLIS/AFP via Getty Images)

TALLAHASSEE - The Florida Senate is poised to deliver one of Gov. Ron DeSantis’ top legislative priorities, after spending hours Wednesday considering a controversial proposal that would create a new crime of "mob intimidation," enhance penalties on riot-related offenses and make it harder for municipalities to trim spending on law enforcement.

The bill (HB 1) has become one of the 2021 legislative session’s most contentious issues, not only due to its content but also because of its timing.

The Republican-controlled Senate took up the measure as jurors on Wednesday continued to hear testimony in the trial of former Minneapolis police officer Derek Chauvin, who is accused of murdering George Floyd by kneeling on the Black man’s neck for more than eight minutes last May.

DeSantis laid out the framework of the legislation in September, after Floyd’s death sparked largely peaceful protests focused on racial disparities in policing and other aspects of American life.

The measure has drawn fierce criticism from civil-rights advocates, Democrats and Black legislators, who argue it would have a disproportionately negative effect on people of color who are arrested and incarcerated at higher rates than white people.

But with Republicans firmly in control of both legislative chambers, the measure --- approved in a party-line vote by the House on March 26 ---- could be headed to DeSantis as early as Thursday.

Senate sponsor Danny Burgess, R-Zephyrhills, fielded questions from Democrats during Wednesday’s floor session, after Republicans swatted down more than a dozen amendments that would have scaled back the measure.

"Are you comfortable with this bill and me allowing them to go out and express themselves, that they’re not going to find themselves not just in harm’s way, based on your bill, and that they won’t be saddled with criminal convictions?" Thurston, who is Black, asked Burgess.

"I’m comfortable with the bill that we have identified the difference between a peaceful protest and one that is not," Burgess said. "I think there’s a clear line there, so I don’t believe this will have a chilling effect on those who seek redress through peaceful means."

The bill proposes a host of changes to criminal and civil laws. The new crime of  "mob intimidation" would make it unlawful "for a person, assembled with two or more other persons and acting with a common intent, to use force or threaten to use imminent force, to compel or induce, or attempt to compel or induce, another person to do or refrain from doing any act or to assume, abandon, or maintain a particular viewpoint against his or her will."

The bill also addresses the destruction of "memorials," an issue that has drawn heavy attention after statues of people associated with slavery were torn down or destroyed following Floyd’s death.

The measure also would create a new felony crime of "aggravated rioting" that carries a sentence of up to 15 years in prison.

"Do you believe that this piece of legislation could stifle the future heroes and leaders that could impact not just the state but this nation?" Powell asked.

Burgess argued that the enhanced penalties and new crimes are necessary.

"We can’t allow riots and violence to prevail within our society. We are a nation of law and order and we need to govern ourselves as such," he said.

Democrats also questioned whether the bill would give law enforcement officials too much leeway to interpret what would be considered a "peaceful protest."

The measure would establish an "affirmative defense" for defendants in civil lawsuits involving deaths, injuries or property damage if the injuries or damages were sustained while plaintiffs were participating "in furtherance of a riot."

Critics assert that provision would lead to vigilantism, pointing to the 2017 death of Heather Heyer in Charlottesville, Va. Heyer died after a car rammed into a group of counter-protesters at a white supremacist rally.

But Burgess said the bill is aimed at protecting people who cause damage or injury with their vehicles if they are in fear for their safety.

"That person rammed a vehicle into those people to hurt them. He wasn’t defending himself. He rammed it into them purposefully to hurt them, to kill them, to cause damage. That is not OK and that is in no way shape or form protected in this bill," he said. "If in the course and conduct of trying to defend your family by getting them to safety, that is where this would apply, not with somebody with the intention to actually go out and hurt somebody. That would never be OK."

The Senate set the measure up for a final vote as a coalition of civil-rights organizations condemned it.

During a conference call with reporters on Wednesday, Black Voters Matter co-founder and executive director Cliff Albright said the legislation is a backlash against the passion expressed by "young folks" in the aftermath of Floyd’s death.

The coalition called on seven Florida corporations to stop contributing to the campaigns of state legislators who support the anti-protest measure and an elections bill that would make it harder for Floridians to vote by mail.

Sean Shaw, a former state House member, noted that Chauvin’s trial is underway as the Senate prepares to vote on the protest bill.

"We’re trying to get justice for George Floyd right now. And as this trial is going on, we can’t even pay attention to that because here in Florida we are trying to make it so that you can’t protest about things that led to the death of George Floyd. You can’t do some of the things that oppressed people do when they’ve been oppressed for so long," Shaw said. "So it’s frustrating, but we’re gonna make sure corporations understand that we’re watching. And what’s good for democracy is good for business."