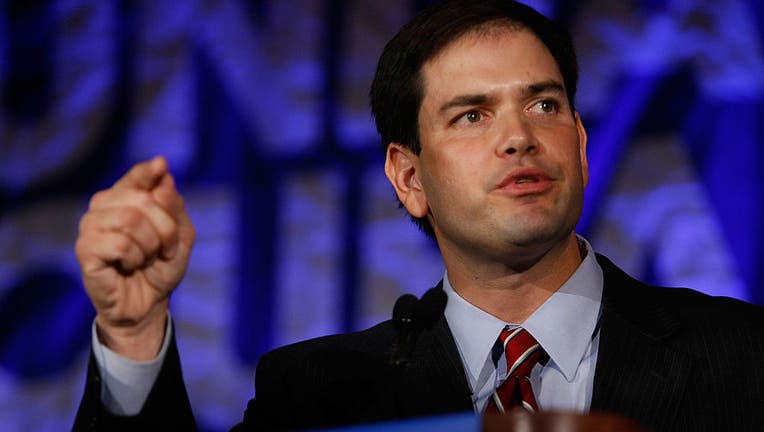 MIAMI - MAY 23: Florida's Speaker of the House Marco Rubio (R-FL) delivers a speech about Cuba before Democratic presidential hopeful Sen. Barack Obama (D-IL) speaks during a Cuban Independence Day Celebration at the InterContinental Hotel May 23, 20

WASHINGTON - They have argued viciously in Congress over just about everything: Whether the Capitol insurrection should be investigated or brushed aside. If the president’s choice for the Supreme Court should be the first Black woman. Even over whether or not to wear masks under the dome.

But as lawmakers gather for President Joe Biden’s first State of the Union address amid the gravity of Russia’s invasion of Ukraine, they have mustered a rare and remarkable bipartisan resolve, determined to hold the U.S. and its allies together in the defense of a Western-oriented democracy.

When Biden stands in the House chamber Tuesday evening, trying to make good on what until now has been a faltering attempt to resolve the nation’s bitter divisions, he may find that the threat from Russian President Vladimir Putin abroad has become the unexpected force pulling the U.S. political parties toward common purpose.

The turn of events is both stunning and fragile. Foreign policy has not been the kind of bipartisan draw it was during the past century, when Congress and the White House worked together as the U.S. dominated the global stage. Factions on the right and left have broken off, most definitively over the long wars in Iraq and Afghanistan, creating oddball political alliances in the U.S. and chiseling away at a shared mission.

The revival of a robust majority that’s largely supportive of Biden’s strategy toward Russia is even more striking because it is shaping up as one of the most significant rejections of Donald Trump’s embrace of Putin and the former president’s praise of Putin’s tactics as Russia invaded Ukraine.

"We’re all together at this point and we need to be together about what should be done," said Senate Republican leader Mitch McConnell of Kentucky.

RELATED: State of the Union: Biden to hold annual address as world focuses on Russia-Ukraine crisis

Still, the State of the Union address may not be free of partisan antics, unfolding against the backdrop of a Congress deeply divided over many issues: a prime-time address to the nation, too tempting for lawmakers looking for attention.

This year is particularly fraught amid ongoing COVID restrictions and a Capitol still largely shuttered to the public in part because of the security concerns in the aftermath of the deadly Jan. 6, 2021, assault by Trump supporters trying to stop Congress from certifying Biden’s election.

"It’s a big worry of mine," said Rep. Adam Kinzinger, R-Ill., who said he hoped his side of the aisle is respectful and doesn’t yell out "stupid" things.

Tuesday’s gathering for President Joe Biden's State of the Union in the House chamber will be the first time all members are invited since the pandemic outbreak in 2020 and last year’s Capitol attack.

Masks will no longer be required, removing one source of friction for those lawmakers who had flouted the guidelines and risked being booted from the session for failing to comply — though COVID tests and social distancing measures will still be required.

But the heavy metal security fence is back up around the Capitol complex, a bow to the "new normal" of threats from within America’s own electorate.

At least one Republican, Sen. Marco Rubio of Florida, will sit it out rather than participate in what he calls COVID "theater," even as he is deeply involved in monitoring the war in Ukraine.

It can’t be said that Republicans are fully pleased with Biden’s handling of the Ukraine war.

McConnell has been highly critical of the president’s runup to the crisis, calling the White House’s disastrous exit from Afghanistan last summer a sign of U.S. weakness that opened the door to Putin’s invasion.

Leading Republican lawmakers have derided what defense hawks view as Biden’s initial reluctance to impose sanctions to deter Putin’s advance on Ukraine. Others have criticized the White House climate change agenda as creating an energy policy that boosts Russian exports, including via the Nord Stream 2 pipeline to Germany, now scrapped over the war.

"We all know what Putin wants, and he said so publicly: He wants to reconstitute the USSR and pull back in his orbit all the countries that were in it before," said Sen. Jim Risch of Idaho, the top Republican on the Foreign Relations Committee. "This is a seminal moment."

But even some of the Trump’s staunch supporters are parting ways with the former president after he called Putin’s invasion tactics "genius."

Republican Rep. Mo Brooks, who rallied with Trump supporters ahead of last year’s assault on the Capitol and has won Trump’s endorsement in the Alabama Senate primary, lambasted Putin’s invasion as "barbaric and evil."

But in a nod to the non-interventionist strain that runs deep in both left and right flanks, Brooks added, "While Putin’s Ukrainian invasion and murders are heinous, this is first and foremost a problem for Western Europe to resolve."

Congress will face tests ahead, starting with Biden’s request for at least $6.4 billion in supplemental funding to help Ukraine, which will require cooperation from both parties.

Sen. Chris Van Hollen, D-Md., said the Trump voices remain "a big part of the Republican Party nationally, but at least so far on Capitol Hill, especially in the Senate, I think you’ve got an overall bipartisan consensus. I hope it stays that way."