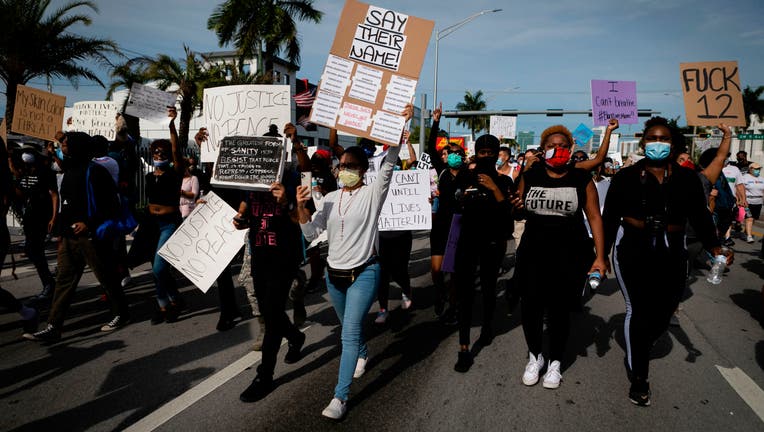 MIAMI - A Fort Lauderdale police officer was suspended after video showed he pushed a kneeling woman to the ground during Sunday protests, resulting in bottles being thrown.

The officer’s colleagues quickly pushed him away from the woman and down the street. Mayor Dean Trantalis told reporters the officer has been suspended pending an investigation. He was not named.

“If it’s turned out that he acted inappropriately, then we will have swift discipline in response to what he did. We do not appreciate that kind of conduct, nobody in the department want to be disrespected, and we feel this should never have happened,” Trantalis said Sunday night.

Police officers fired tear gas on demonstrators who made their way onto Interstate 4 in downtown Orlando on Sunday night as several cities and counties across Florida issued nighttime curfews to curb the large crowds gathering to protest the latest killings of black people by police.

RELATED: Protests across the country, including in Central Florida, demand justice in the name of George Floyd

Orlando Police officials tweeted that demonstrators threw rocks, bottles and construction equipment, and they were forced to temporarily close a section of the main highway that goes through the metro area Sunday night.

In Miami-Dade, the state’s most populous county, Mayor Carlos Gimenez said he would postpone the reopening of the county’s beaches, which had been scheduled to reopen Monday for the first time since March when they were closed to stem the spread of the new coronavirus.

In Miami, Fort Lauderdale, West Palm Beach, Jacksonville, Orlando and Tampa, peaceful protests turned more violent at times over the weekend, with some people throwing objects at law enforcement officers dressed in riot gear. At times, police used tear gas to back the crowds up.

RELATED: Police deploy tear gas at demonstrators on I-4 in Downtown Orlando

Protesters were demanding justice for George Floyd, a black man who died after pleading for air as a white police officer in Minneapolis pressed a knee on his neck last week. The officer was charged, but that hasn’t stemmed the protests happening in cities nationwide.

Many protests were largely peaceful across the state Sunday with thousands gathering in Daytona Beach, Jacksonville, Stuart and Tampa. Some organizers intensified efforts to contain their demonstrations and prevent the violence.