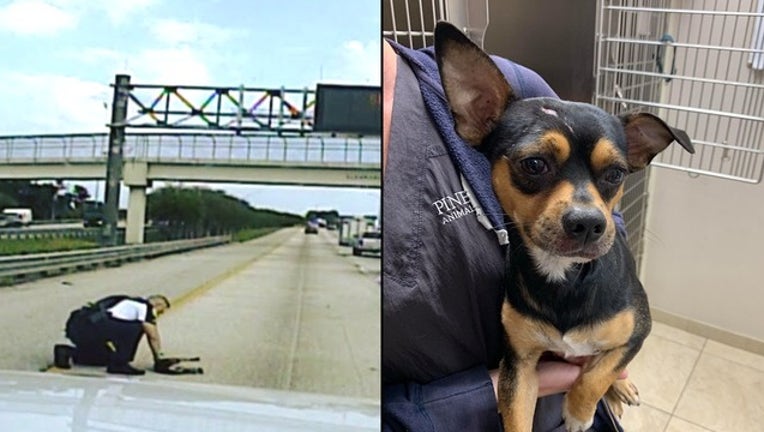 PINELLAS PARK, Fla. (AP/FOX 35 ORLANDO) - A Florida police officer is getting praise for darting into a busy interstate to rescue a dog that had just been hit by a car.

Pinellas Park police Officer Joseph Puglia says his heart "really sank until I started seeing him breathing." The dog wandered onto Interstate 275 in Tampa on Monday.

Video from Puglia's dash cam showed him stop and get out within seconds of the dog getting hit. Puglia says he wrapped the dog in an emergency blanket, put him in his SUV and called dispatch.

"The team at the Pinellas Animal Hospital was notified of the incident by our communications department and they were awaiting Ofc. Puglia's arrival," wrote the Pinellas Park Police Department on Facebook.

The dog survived with minor cuts and bruises.

"After some medical examinations, the dog is expected to make a full recovery. The owner has not yet been located due to the dog not having a microchip or tag."

Puglia says they nicknamed the dog, who ended up in the county's animal shelter, Lucky. If no one claims Lucky, he says family members are ready to take him.

"This incident is just another example of the dedication and compassion our officers have for our four legged friends. Great job to Ofc. Puglia."

VIDEO: Florida woman arrested for kicking, pulling dog off the ground by leash

‘I came out in tears': Professional violinist performs for abused shelter dogs to calm them