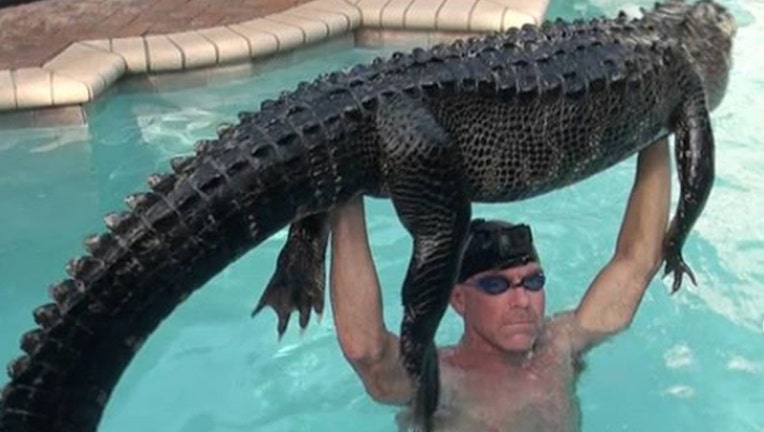 PARKLAND, Fla. - According to Paul Bedard of the Gator Boys Alligator Rescue, they got a call on Wednesday morning about an alligator swimming inside a pool at Parkland home.

Paul said on his Instagram page that the alligator was about eight-feet, eight-inches long.

The gator had reportedly walked through a screen and into the pool.

"I haven't had a good-sized gator in a swimming pool in probably a year, so I was kind of looking forward to this when I got the call," Paul said. "These are actually fun because the gator can't go anywhere and the water's almost always crystal clear. So all I have to do is jump in the water play around with him until he's tired and I can either hold his mouth shut and put a snare on it and tape it, or if he super energetic I can get him tired enough where I can just pick him up without the tape and carry him out in the yard and then tape him up once I get there."

Paul went on to say that the gator was super mellow and did not give him a hard time at all. He said the gator "didn't really give me a hassle at all, it was basically as smooth and easy as it ever gets. Thank you Lord, much appreciated."

Paul also told FOX that because of the gator's cool and mellow demeanor, he named it 'Cool Hand Luke.'

Once rescued, the gator was brought to the Everglades Holiday Park. Paul told FOX 35 that the gator will be used to do educational shows for the public and raise money to help keep the rescue scene afloat.

The Gator Boys Alligator Rescue is composed of Paul Bedard and Gabby Scampone. They are experienced alligator trappers that went on to have their own Animal Planet show. They now reside at the Everglades Holiday Park, where they provide a safe haven for gators.