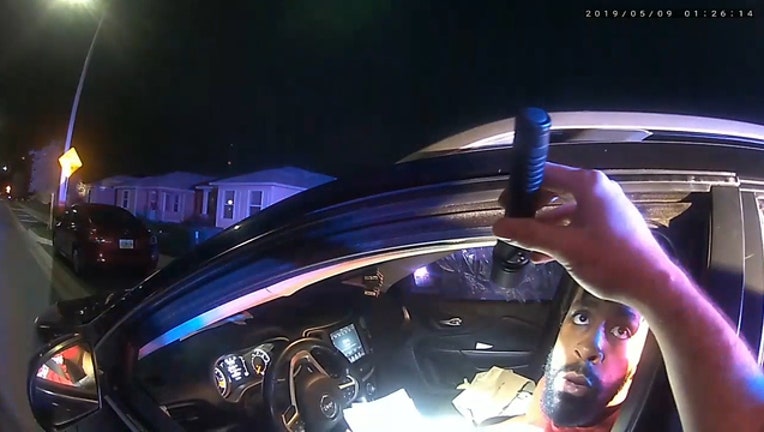 ORLANDO, Fla. (FOX 35 ORLANDO) - A Florida man is facing attempted murder charges after police say he dragged an officer who found marijuana in his vehicle during a traffic stop.

Authorities say Askew was initially stopped for missing his passenger window. Murphy searched inside the vehicle and found marijuana, asking Askew to step out. The body camera video shows Askew running back to jump in the driver's seat as Murphy tries to stop him.

“Dude you're killing me! Stop! Stop!” Officer Murphy can be heard yelling. “Stop the car and get out!”

Officer Murphy initially pulled the driver over for an expired tag, according to the arrest affidavit.  The officer noticed a busted window, all taped-up, then the report states the officer found drugs in the car.
“Sir, how much weed is in the car?” Officer Murphy asks. “There is no weed,” Askew replies. “I see a little bit of shake right there on the center console, right there. Green stuff all over,” Officer Murphy responds.

Authorities said the video then shows the officer searching the car and finding a bag full of pot locked in the glove box.  Askew makes a run for it, seen on video jumping into the driver's seat and flooring it.

“Stop, or I'm going to shoot you!” Officer Murphy yelled.

According to the arrest affidavit, the top-half of the officer's body was inside the car.  He used one arm to hang on and the other to stop the suspect.  At one point, the report states, the officer even tried biting the suspect, but Askew kept going.

The officer noted that he tucked his legs in just as the suspect hit a parked car on is driver’s side.

According to the arrest report, the vehicle hit high speeds. The chase ended when Askew traveled down a dead-end road and hit another car.

In the body camera video, Officer Murphy is out of breath as he tells the suspect that he almost killed him.  The camera points down as Officer Murphy bends over to look at his legs, running his hands up and down his calves, making sure he’s really ok.

“Dude, I thought he was going to take my legs off,” Officer Murphy said.

Askew was arrested after the May 9 incident and tackled to the ground.  He remains in the Orange County Jail, without bond as he awaits trial in October.  No attorney was listed for Askew in jail records.

OPD said Officer Murphy is okay and back to full duty.