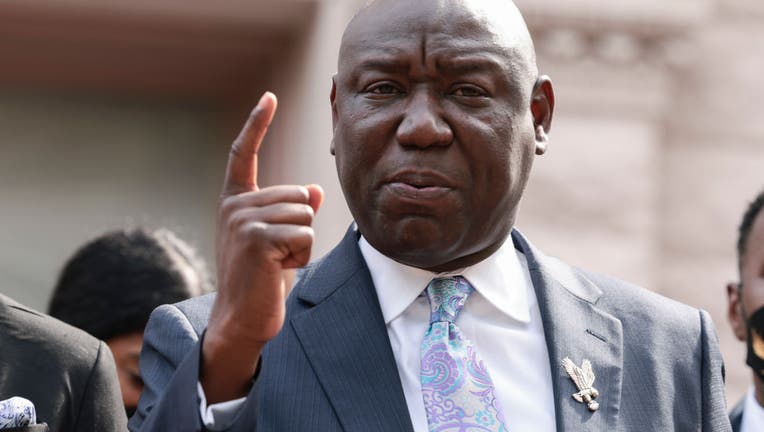 WASHINGTON, DC - SEPTEMBER 16: Attorney Benjamin Crump (C) gestures as he speaks at a news conference on the 2016 fatal police shooting of Terence Crutcher an unarmed Black man, on September 16, 2021 in Washington, DC. During the news conference, hel

The Benjamin L. Crump Center for Social Justice, housed at the St. Thomas University College of Law in Miami Gardens, aims to nurture the next generation of civil rights lawyers while also pushing more racial and gender diversity in the legal profession, school officials told The Associated Press ahead of the announcement.

Calls for racial justice saw greater prominence in the wake of the 2020 protests over George Floyd’s murder by a Minneapolis police officer. But the nation lacks a robust pipeline of social justice lawyers ready to take on such cases, said Crump, who has represented the families of Floyd, Trayvon Martin, Michael Brown and Breonna Taylor, among others.

"We really are trying to prepare an army — the next generation of social justice engineers," the Tallahassee, Florida-based attorney told the AP.

MORE NEWS: Does Florida owe you money? $2.5 billion waiting to be claimed

"We will have the next Thurgood Marshall, the next Constance Baker Motley, or the next Kamala Harris, to light the way for our community and get the American promise of liberty and justice for all," Crump added.

Beginning with a $1 million leadership grant from Truist Financial Corp.’s charitable fund, the Crump Center will support an incubator program for students looking to establish themselves in civil rights and social justice lawyering. The center also will increase need-based financial aid for students and will assist new lawyers with expanded pro bono service placements.

"No one becomes Ben Crump on their first day as a lawyer, but mentorship is critical to building the confidence and the platform for people to excel," said Tamara Lawson, dean of the St. Thomas University College of Law.

Lawson said the center will focus on training students to be leaders in social justice lawyering. "It’s not just about participating in the work, but creating the vision and taking it to the next level," she said.

On Thursday, the law school also will launch a $35 million fundraising campaign to expand its ongoing training of lawyers who fight for social justice. The money is expected to be used for construction of a new building for the Crump Center, as well as new classrooms and simulated courtrooms, Lawson said.

The university’s announcement comes a week after Crump, with civil rights leader the Rev. Al Sharpton and the family of Ahmaud Arbery, heralded guilty verdicts in the murder trial of three white men in Arbery’s death. The 25-year-old Black man was chased and then shot and killed in February 2020 as he jogged through the men’s Brunswick, Georgia, neighborhood. The verdicts notched yet another high-profile victory for Crump, whom some call " Black America’s attorney general. "

As a past president of the National Bar Association, the largest network of predominantly Black attorneys and judges, Crump said civil rights and social justice lawyering isn’t seen as a lucrative area of practice for aspiring attorneys. He said he hopes that lending his name to the center inspires law school students to consider social justice as a worthy, career-long pursuit.