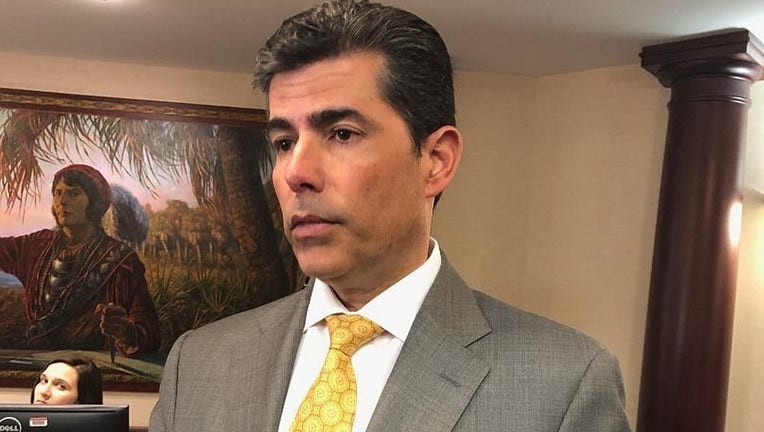 TALLAHASSEE, Fla. - The Florida House speaker on Tuesday called into question the state’s COVID-19 death toll, warning that it was based on compromised data and used a methodology that inflated death rates.

Speaker Jose Oliva, R-Miami Lakes, sent a memo Tuesday to all House members announcing the findings of an-in house analysis he ordered of the state’s COVID-19 death numbers and cautioned lawmakers against using the data for policy purposes. The death totals are released daily by Republican Gov. Ron DeSantis’ administration.

“Precision in data is imperative, not just for proper decision-making, but also for public confidence and consistency of response,” Oliva wrote in the memo accompanying the analysis. “The great disparity of perspective between the political parties has been further exacerbated by the loosening of process and fidelity to established norms in classification. Our leaders cannot build upon the soft-footing of compromised data.”

Oliva issued the memo and analysis weeks before he leaves office following the Nov. 3 elections. New lawmakers and new leaders will be sworn in during a Nov. 17 organization session.

Rep. Anna Eskamani, D-Orlando, said she initially was surprised by Oliva’s memo, given the Florida Senate’s recent decision to hire Tampa General Hospital to develop an infection-prevention plan to take steps to improve the safety of senators and staff members.

“What this comes down to is this is COVID-19 deniers. And I hate to say it, but this is a complete attempt to downplay this pandemic that has destroyed lives across the country and world,” Eskamani told The News Service of Florida. “There are so many steps we can take to not cause controversy over this pandemic and just get our job done. It’s very frustrating to see these used-up attacks to downplay the pandemic.”

Oliva did not respond to a text message seeking comment.

Information released Tuesday by the state Department of Health said 15,531 Florida residents have died of COVID-19. Florida trails only New York, Texas, California and New Jersey in the number of deaths.

The analysis also found that most of the death certificates were filled out by medical examiners and not by physicians who cared for patients before they died.

“Certifying the cause of death is an expression of a medical opinion, and clinicians can disagree about a  diagnosis or a cause of death. A physician’s familiarity with the conditions of each patient is likely to impact the accuracy and completeness of the information on the death certificate,” the report said. “It is possible that  pandemic conditions led to more death certificates being completed by physicians or medical examiners who had limited knowledge of the patients and by officials facing significant workload pressures.”

Additionally, the  analysis criticized the federal Centers for Disease Control and Prevention’s guidelines to include in the death total all deaths in which positive COVID-19 tests are known. Florida abides by the guidelines.

“Any ‘current’ count of COVID-19 deaths is more accurately described as the number of people with COVID-19 who died, rather than those who died from COVID-19,” the analysis said.

The inclusion increased Florida’s death count by 10 percent, according to the analysis.

Rep. Shevrin Jones, D-West Park, tested positive for COVID-19 on June 26 and was sick until July 16. Jones, who won an August primary that virtually assured him a seat in the Senate next month, said the speaker should have better used staff’s research time.

“Why are we spending our time justifying how someone died? They should be using their time  to get data from unemployment or using their time to get data on those individuals who are unemployed and no longer have health insurance and are using emergency rooms because of unemployment,” Jones said. “We are utilizing our time to create a new narrative to make it ‘not so bad.’ It's irresponsible of us.”