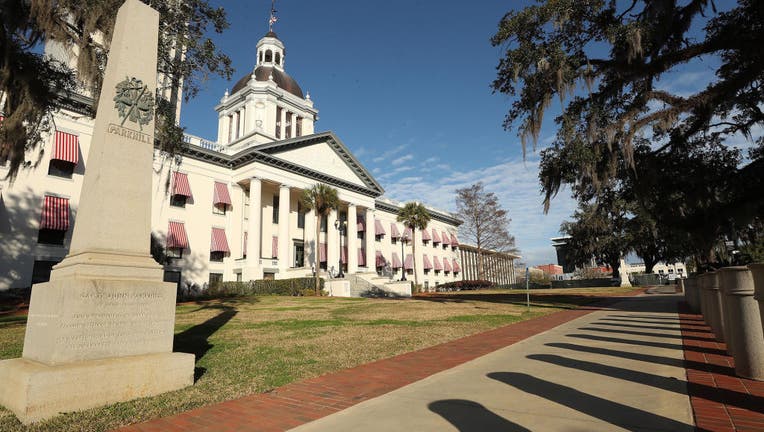 TALLAHASSEE, Fla. - Gov. Ron DeSantis could get his wish to revamp a North Florida district held by a Black Democrat, as a state House panel moved forward Friday with a plan that could increase Republican seats in Congress.

The House Redistricting Committee voted 15-9 to advance to the full House a pair of revised congressional maps that Democrats and other critics said fall short of requirements under a 2010 "Fair Districts" constitutional amendment. With two weeks left in the 60-day legislative session, lawmakers are trying to finalize a congressional map as part of the once-a-decade redistricting process.

"We are faced with a unique situation," acknowledged committee Chairman Rep. Tom Leek, R-Ormond Beach. "This is the House's attempt at continuing to protect the minority groups’ ability to elect a candidate of their choice, addressing (district) compactness concerns and working to make sure we bring this process in for landing during the regular session."

DeSantis threatened to veto a congressional map that would maintain Democratic Congressman Al Lawson’s district, which is designed to help elect a Black candidate and stretches more than 200 miles from Jacksonville to the west of Tallahassee.

A map needs to be in place before candidate qualifying begins in mid-June. One of the House proposals Friday was considered a "primary" map, with the other a backup.

The primary map (H 8017), introduced late Thursday, would eliminate the sprawling shape of Lawson’s Congressional District 5 and make it compact within Duval County.

DeSantis has pushed for a similar compact design of the district, calling the existing configuration unconstitutional. But the state Senate’s proposed congressional map, which was approved last month, would keep the sprawling design of District 5, which was approved by the state Supreme Court in 2015. Lawmakers also have said keeping the design would avoid diminishing the ability of minorities to elect a representative of their choice.

Under the House proposal, 35 percent of the voting-age population in the revamped district would be Black, which could grow to more than 60 percent in a Democratic primary.

Before the committee meeting, House Speaker Chris Sprowls, R-Palm Harbor, described the proposal as "creating a more compact North Florida district that should enable minority voters to elect the candidates of their choice" and said it "creates a singular exception to the diminishment standard."

The map would face court tests if it is ultimately approved by the full House and survives negotiations with the Senate and DeSantis’ veto pen. If the map is found unconstitutional, the House plan includes the backup map (H 8015), which has lines for Lawson’s district that are similar to the current configuration --- Jacksonville to the Jackson County line.

"This secondary map is one the Legislature knows is legally compliant under current law and keeps the previously proposed configuration of District 5," Sprowls said in the memo.

Democrats called the two-map proposal "novel," with Rep. Joe Geller, R-Aventura, saying the need for a backup plan demonstrates House leaders aren’t confident in the constitutionality of the primary map. Rep. Kelly Skidmore, D-Boca Raton, said she was disappointed the House has "acquiesced" to the governor.

Even before the emergence of the new plan, Democrats and other supporters of the Fair Districts amendment had raised concerns about a House proposal that was backed by the Congressional Redistricting Subcommittee. They said that proposal did not fully reflect the growth of Hispanic and Black populations in Central Florida and South Florida.

Leek opened Friday’s meeting by acknowledging a risk of legal challenge "is real," while dismissing a request by Geller for a "functional analysis" of all districts, rather than just minority-access districts.

"The partisan analysis of these maps that are not protected districts will lead us down the road to disaster," Leek said. "Stop injecting the partisan nature into this process. Let us do our work."

Outside of Lawson’s seat, the two new maps are close to what came out of the subcommittee.

Florida is picking up an additional congressional seat this year because of its population increase over the past decade. The primary map approved Friday could result in the number of GOP-held seats increasing from 16 to 18, based on 2020 voting patterns.

The Senate’s proposal could lead to 17 Republican seats.

DeSantis proposed a map that would drop the number of districts that historically have elected Black candidates from four to two, with both of the remaining districts in South Florida. It also would bump up the potential number of Republican districts from 16 to 20.

As lawmakers redraw districts, they have to take into account the Fair Districts constitutional amendment, which set guidelines for reapportionment.

Among the differences between the House and Senate plans are the futures of Central Florida’s Congressional District 7, held by Democrat Stephanie Murphy, and District 10, held by Democrat Val Demings. Murphy is not seeking re-election this year, while Demings is running for U.S. Senate.

The Senate would keep most of the existing lines for those districts in place.

The House would merge most of the two districts, potentially reducing Democrat seats in the Orlando area from three to two. The change would move Murphy’s district from Democratic-leaning to Republican, while slightly increasing Black representation in District 10.