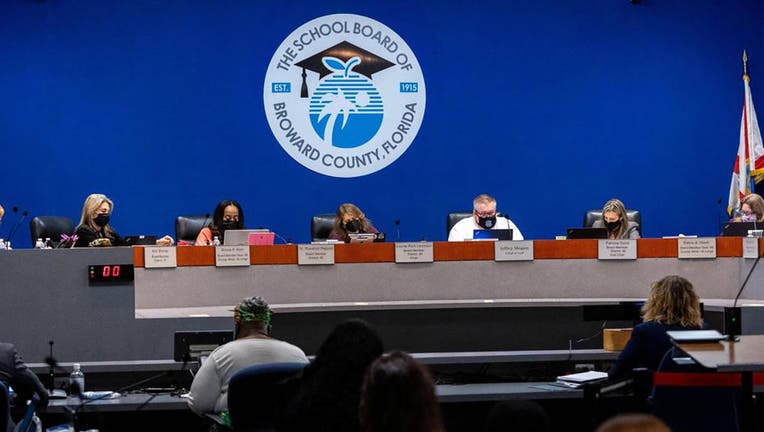 Dr. Vickie Cartwright answers questions from members of the Broward County, Florida, School Board during a board meeting to pick the next superintendent on Feb. 9, 2022. (Jose A Iglesias/El Nuevo Herald/Tribune News Service via Getty Images)

FORT LAUDERDALE, Fla. (AP) - A Florida grand jury empaneled after a 2018 school massacre has recommended that Gov. Ron DeSantis remove from office four members of the Broward County School Board, saying they and district administrators displayed "deceit, malfeasance, misfeasance, neglect of duty and incompetence" in their handling of a campus safety program.

In the 122-page report released Friday, the panel recommended that DeSantis suspend board members Patricia Good, Donna Korn, Ann Murray, and Laurie Rich Levinson. A former member, Rosalind Osgood, was also targeted, but she is now elected to the Florida Senate.

Levinson, the board’s chairwoman, angrily slammed the report as a "political hatchet job" orchestrated by the governor.

"It is nasty partisan politics. He should be ashamed of himself," she said.

The grand jury began meeting 15 months after 14 students and three staff members were gunned down on Feb. 14. 2018, at Marjory Stoneman Douglas High School in Parkland, a Broward County suburb. The shooter, Nikolas Cruz, pleaded guilty in October and is now on trial to decide whether he will be sentenced to death or life without parole.

Former Broward Superintendent Robert Runcie resigned last year after he was indicted for allegedly lying to the grand jury. He has pleaded not guilty and is awaiting trial. The district is the nation’s sixth-largest, with more than 270,000 students at 333 campuses, and an annual budget of $4 billion.

The school board has nine members, including two, Debra Hixon and Lori Alhadeff, who were elected after Hixon’s husband and Alhadeff’s daughter died in the Stoneman Douglas shooting. They ran on platforms promoting better campus security. Alhadeff, in particular, has frequently been at odds with the targeted members, particularly over Runcie’s performance before his resignation.

The grand jury said that Runcie’s and the accused board members’ "uninformed or even misinformed decisions, incompetent management, and lack of meaningful oversight" has led to massive cost overruns and delays in a school safety and education program approved by county voters in 2014. The report says the $1 billion program that was supposed to be completed in 2021 is now projected to cost $1.5 billion when it is finished in 2025 — estimates the jury called "wishcasting."

"This doubling of time and almost 50 percent increase in cost did not happen overnight," the grand jury wrote. "It was a slow-boiling frog that resulted from years of mismanagement from multiple (district) officials whose mistakes were compounded by the Board, which has....refused to hold (district) leadership to account."

Levinson, who is not seeking reelection as her third four-year term expires at the end of the year, said the grand jury was supposed to focus on what caused the Stoneman Douglas shooting, pointing to the victims’ parents who stood with DeSantis when he announced its formation.

"It is disgusting that on the backs of these families to have a bait-and-switch grand jury," she said. "The majority of the report has nothing to do with Marjory Stoneman Douglas."

Korn said in a statement that "while I respect the grand jury process, I stand on my record," pointing to the district’s high graduation rate.

DeSantis fired former Broward Sheriff Scott Israel just after he took office in January 2019, saying Israel’s lack of leadership contributed to the Stoneman Douglas shooting. DeSantis is a Republican, but Broward is a Democratic stronghold by a 2-to-1 margin. If the governor suspends the board members, he would appoint their replacements until the seat’s next election.

"We appreciate the work of the grand jury and are reviewing the findings and recommendations at this time," said DeSantis spokesman Bryan Griffin.

Murray, like Levinson, is not seeking reelection in November, but Korn is. Good’s term expires in 2024.

The grand jury report says the Broward school district seems to be more focused on how it is viewed publicly than on actual accomplishment.

"Broward County has provided a cornucopia of examples of an almost fanatical desire to control data and use it to manipulate public perception, including that surrounding safety," the grand jury wrote. Runcie and the accused board members "are seemingly obsessed with the optics of any situation and control of public impressions of their activities."

"The District produces training materials on ‘Building the Brand’ as though the district were all important while its students were mere commodities and instructs employees to always consider how situations might affect the perception of the District as opposed to the reality," the jury wrote.

AP writers Brendan Farrington in Tallahassee and David Fischer in Miami contributed to this report.