PERRY, Fla. - The suspect who was wanted for shooting and critically injuring a north Florida deputy -- setting off a statewide Blue Alert -- was killed in a shootout with a homeowner after he broke into the man's house.

The Dixie County Sheriff's Office said 33-year-old Gregory Miedema was shot and killed around 7 a.m. Wednesday at a home near Tennille, Florida. The homeowner told deputies he exchanged gunfire with Miedema, who was armed, after he entered his house. Miedema was dead when deputies arrived at the home.

The sheriff's office said they located Miedema's vehicle at the scene, along with several firearms that were strategically placed in what appeared to be an "ambush setup."

The Florida Department of Law Enforcement had issued the Blue Alert for Miedema around 11:30 p.m. Tuesday, after he shot a Taylor County sheriff's deputy in Perry.

The Dixie County Sheriff's Office responded to assist Taylor deputies after the shooting, and said the deputy had been shot while conducting a traffic stop.

According to WCTV, the Taylor County Sheriff's Office identified the wounded deputy as Troy Andersen, who was part of the K9 unit. He was airlifted to a nearby hospital, and is in stable condition. 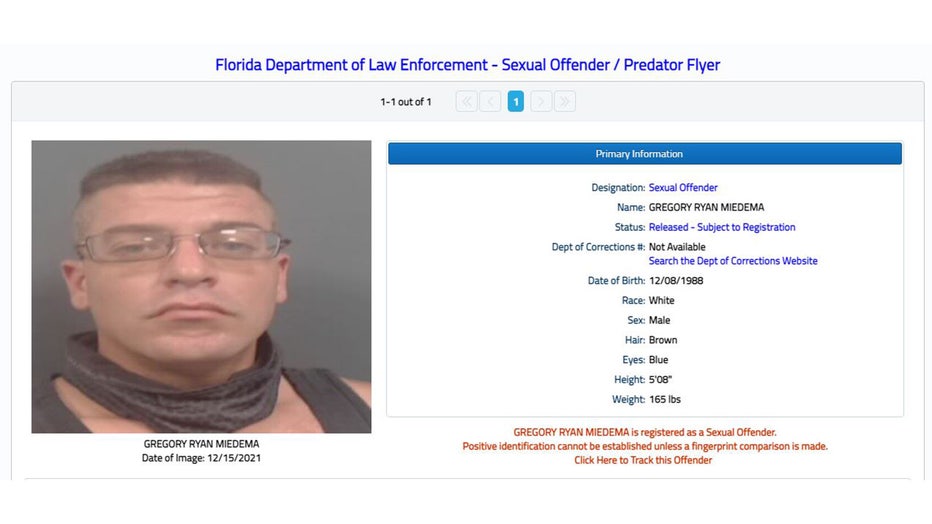 Miedema is a registered sex offender in the state. His last known address, according to state records, was in Fort Myers. He was found guilty in 2011 of sex offenses while serving in the U.S. Army.

He once resided in Sarasota, back in 2019, on Lorraine Road. According to the sheriff's office, he was sentenced to 78 months in federal prison.

RELATED: What is a Blue Alert?

The Blue Alert notification system that has been around for a decade to alert the public when a law enforcement officer is seriously hurt, killed or missing in the line of duty.

When a Blue Alert goes out, Polk County Sheriff Grady Judd knows one their own is in trouble.

"It's immediately 'all hands on deck' because something terrible has happened to a law enforcement officer and the suspects are not in custody," Judd said.

This is the 4th ever Blue Alert issued since it was established in 2011. PCSO has never needed to utilize it. They hope they never do.

Judd says his prayers are with Deputy Anderson as he recovers from his injuries. And he said they're appreciative that Miedema is no longer a threat.

"When you break into a house of a stranger and you're shot, shot and killed, that's on you. The homeowner did exactly what he should have done, and that's protect himself, his family, and his home" Judd said.