Deadly hornets from Asia that measure up to 2 inches long have been found for the first time in the U.S.

LAKE MARY, Fla. - The big buzzing bugs with the menacing name that have been dominating social media feeds all weekend: The murder hornets.

The extra-large hornets measure up to 2 inches long and have caught the attention of Americans after being spotted in Washington State late last year.

That discovery led to some experts sounding the alarm, concerned the Asian natives could colonize in the U.S. and cause serious problems.

Local experts, however, say don’t get too buzzed up on this one.

"We don't anticipate them coming at all,” said Amy Vu, extension coordinator at the University of Florida Honey Bee Research and Extension Laboratory. 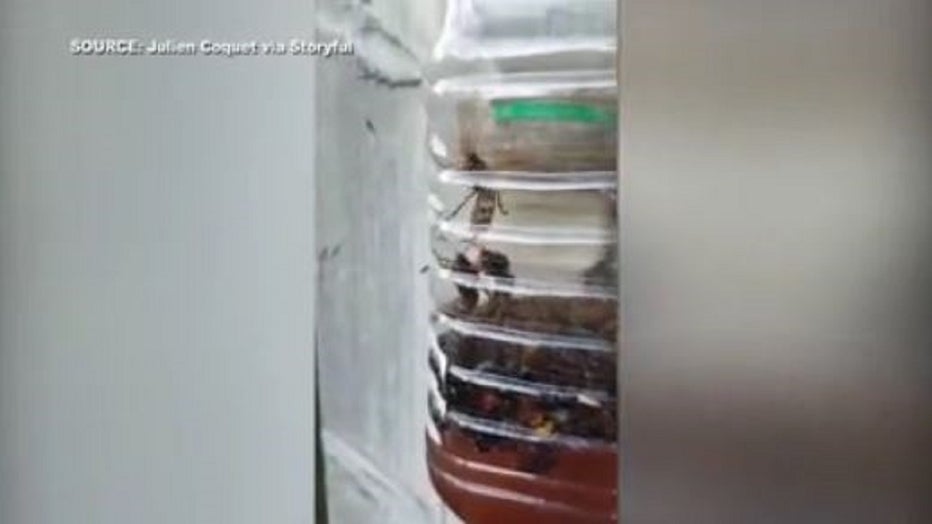 Vu said Monday that she’s answered a lot of questions about the murder hornets lately, which are actually called Asian giant hornets.

She said state experts have their eyes on the species, but aren’t anywhere near raising an alarm in Florida.

"Yeah, we don't have any reported cases here,” Vu said. “The Florida Department of Agriculture and Consumer Services, they are really at the forefront of making sure invasive species like this don't make it to the state."

The murder hornet buzz has also been high on Oviedo beekeeper Dennis Langlois’s radar, though he too isn’t locking down his hives.

Langlois said the Asian giant hornet has been a topic of discussion in the bee community for some time as the bugs can be a serious issue for beehives.

"Oh, they're huge and they'll decimate a colony,” he said. “There's a couple YouTube videos out there where you can see these things decimating a honey bee colony within a few minutes."

Experts say the hornets can also, in rare cases, be deadly for humans.

However, Langlois said that even if the hornets made it to Central Florida, he doesn’t believe they’d easily survive to do a lot of damage.

He said as ground-nesters who make their homes in the sides of hills and mountains, he thinks they’d likely just get drowned out during Florida’s rainy season.

Still, if the hornets do show up locally, Langlois said it’s beekeepers like him that will likely notice first and get state leaders acting fast on the problem.

Vu said if any Florida residents believe they’ve spotted the invasive bugs, they can report it to The Florida Department of Agriculture and Consumer Services.