Florida 1 of 4 states not yet past vaccinating seniors

TAMPA, Fla. - The focus on seniors first is one of the major ways Florida differs from other states in the way the COVID-19 vaccine is being distributed.

Across the country, where you fall in line for a shot depends on where you live, and it varies greatly.

Since the fall, the non-profit Kaiser Family Foundation has been tracking and analyzing how each state is rolling out the coronavirus vaccine, and what populations each one is prioritizing.

"This is complicated everywhere, and I think that’s a challenge for all people in the United States trying to understand when it’s gonna be their turn," said Jen Kates, KFF senior vice president and director of global health and HIV policy.

She says Florida does stand out as doing things differently than most other states when it comes to distributing the COVID-19 vaccine.

"Florida’s made the decision to prioritize 65 and older as the main way in which it’s going to start its vaccination program, Kates said. "Some other states have done that, but are starting to move to other groups."

Since January, nearly every state is now making seniors a priority. 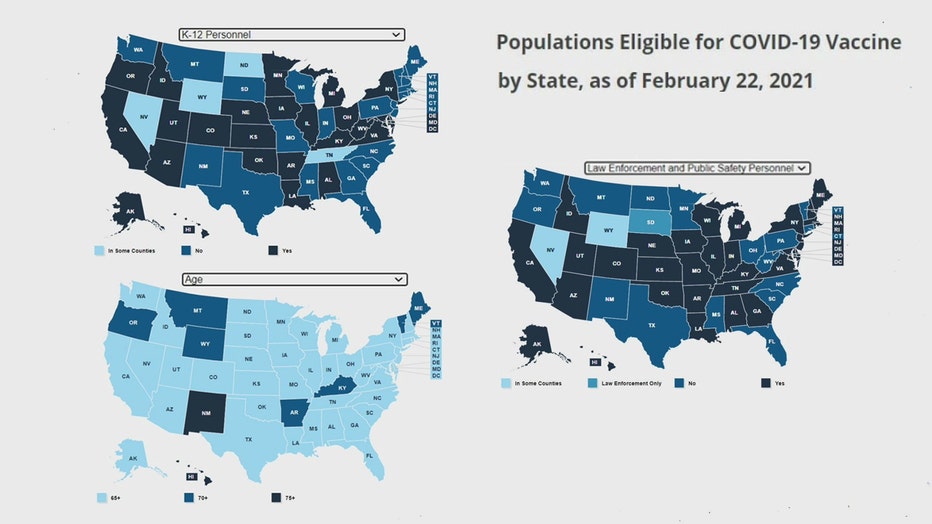 As of Monday, Florida remains one of 21 states that has not provided shots to teachers, and one of 16 that isn’t yet inoculating law enforcement and other first responders.

Until this week, there had been no mention of who would be next in line for the COVID-19 vaccines, making Florida the only state not to provide residents with that information. The only public plan for vaccine distribution is a draft from October.

Governor Ron DeSantis announced Tuesday teachers and law enforcement officers age 50 and older could get access to shots next week, and Wednesday, he gave the first glimpse of who might be up after that group.

Vaccine shipments delayed by winter storms are finally showing up, and Florida is moving forward with its plan.

"Once we get to the point of the senior population where we start to see the demand go down, then we obviously are going to lower the age and get people, at a minimum 60 and then maybe even 55 right off the bat, but it really is dependent on making sure we have the supply," he said.

According to the Kaiser Family Foundation’s analysis, Florida is one of only four states that has not yet moved on to new groups.

DeSantis has not provided any additional details about expanding vaccine access to teachers and law enforcement. He says more information should be out early next week.

The numbers below represent the percentages of all age groups, and the percentages of seniors 65+, who have received at least one dose of a vaccine in each of the 11 counties in the Bay Area, based on the state’s daily vaccine report and U.S. Census 2020 population estimates for county populations.