'Something that we haven't seen before': Massive beach erosion in Florida county

The sand at Flagler Beach looks like someone took a giant ice cream scoop out of the beach. City officials say this all started a couple of weeks ago.

FLAGLER BEACH, Fla. - The sand at Flagler Beach looks like someone took a giant ice cream scoop out of the beach. City officials say this all started a couple of weeks ago.

Locals like Craig Batchelor say they're worried to go out on the sand. "I won't go down there," he said.

The Flagler Beach City Commission held an emergency meeting Wednesday morning, to address the disappearing sand. "It's funny," said Flagler Beach City Manager William Witson, "it just kind of happened over the last month. It started with the ‘super moon,’ and it's gradually gotten worse."

"Is something that we haven't seen before," added City Commissioner Ken Bryan, "I was on the beach yesterday. I'm 6 ft tall, and the top of the dune area, normally the dune itself, was all just flat. So all the sand is just washed-out." 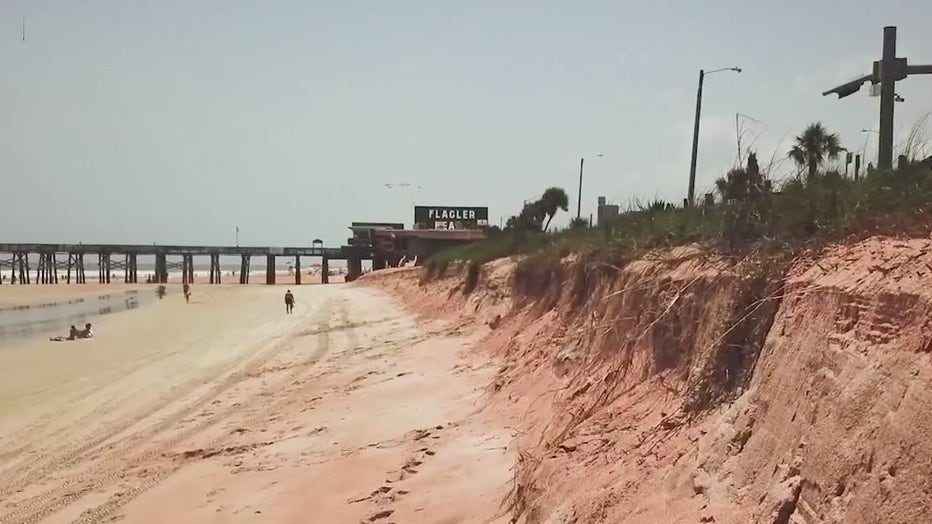 The city says they're looking to work with engineers on a short-term fix for the problem. "We've had coastal engineers come out and check it. So far, we're good, but it moves around. We want to make sure there's no impact to public facilities like roadways or other kinds of things," Witson said.

"It's not too far from where A1A is, so obviously because of what happened during the last hurricane, we're very much concerned," said Bryan.

They say next summer they'll be adding new sand to the beach, which will be a long-term solution. "We're gonna get it, it's coming," said Witson, "but we have to find a way to make it, until that point."

He says Flagler County will also discuss beach erosion at their meeting on Monday. The Flagler Beach City Commission will meet again Thursday after that to work on more short-term answers.