A Lake Nona family spent Thursday salvaging what few belongings they could, after a devastating fire gutted the house, Wednesday afternoon.

There’s not much left of the D'Amelio's home. They said they are getting by with help from neighbors, and total strangers.

"From what I understand, it was a remote control battery charger that was fairly new that we'd hooked-up on my son's workbench. That's how it started, so it was a garage fire," said homeowner Teri D’Amelio. "We keep our gas can in there with the lawnmower, and we have a generator. I guess those are what exploded."

Neighbor Christie Adkins was home when it happened.

"There was quite a lot of popping and a lot of noises you could hear from stuff settling in the garage or exploding. We kept everyone across the street and out of harm's way. As soon as the fire department got here, they took care of it," she said.

D'Amelio said her sons, Michael, 10, and Matthew, 9, who were home at the time, turned into heroes.

"Michael was awesome; he's only ten. He ran in and shut both doors to the laundry room and garage, yelled to my mother-in-law, and he called 911 from his iPad, he doesn't have a phone," she said. 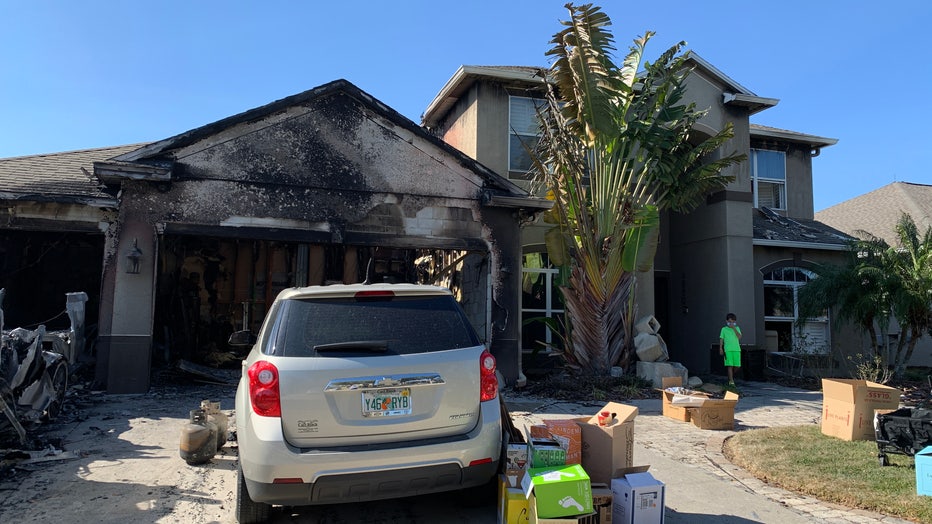 Since then, she said neighbors in their tight-knit community had all been chipping in to help.

"Lots of laundry -- we have four or five houses going through laundry. With the fire department's help, they were able to get us a lot of her memorabilia, pictures, important papers. We took that to a neighbor's house and spent three or four hours drying them off and spreading them out so she can save some of those," Adkins said.

The D’Amelios said all of that is replaceable, and Teri is most proud of her sons.

"Super proud," she said, "they just did all the right things that, they're taught this in school."

The Nona Soccer Academy, where Teri works, is collecting donations from 10 a.m. to 2 p.m. for the family. There is also a GoFundMe page set up to help the family.