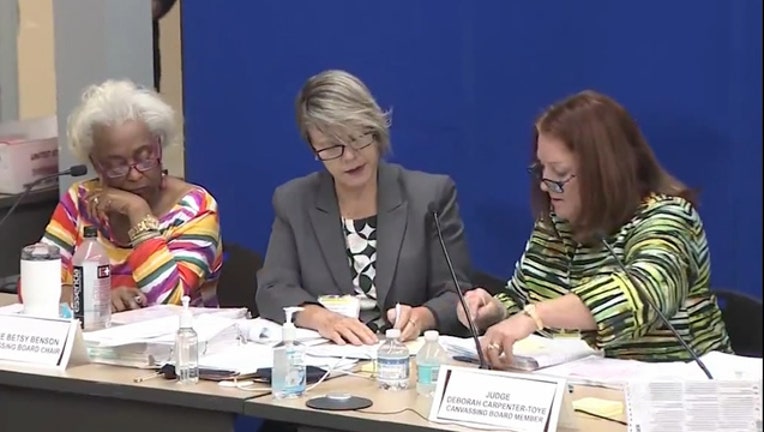 While some elections supervisors tallied remaining votes, a recount appeared almost certain in the Senate race, which Scott led by 56,000 votes on election night. The Republican’s advantage dwindled to about 15,000 votes --- out of nearly 8.2 million ballots cast statewide --- by Friday, well within the 0.5 percent margin requiring a machine recount.

But elections experts say the process is working exactly how it is designed under a state law that gives county supervisors until noon Saturday to submit their preliminary, unofficial results to the Florida Division of Elections.

The supervisor spoke to reporters shortly before a 1 p.m. meeting of the county canvassing board, comprised of a judge, a county commissioner and Earley. Like other canvassing boards, the panel makes decisions about mail-in ballots and provisional ballots and plays a significant role in hand recounts.

Voters in Florida can cast ballots in a variety of ways. They can vote by mail, cast ballots in person during an early-voting period in the two weeks before the election, or they can vote on Election Day. Voters whose eligibility is in question or whose information cannot be verified on Election Day can cast “provisional” ballots, which have to be scrutinized by local officials and may also need to be validated by county canvassing boards.

After the unofficial results are submitted to Tallahassee by mid-day Saturday, Secretary of State Ken Detzner will determine whether any of the races fall within the 0.5 percent margin requiring a machine recount.

In a machine recount, all of the ballots are fed through voting machines. Ballots with “undervotes” or “overvotes” --- in which voters may have skipped a race or made extra marks in races, causing their ballots to be rejected by the machines --- are set aside, or “outstacked.”

Under state law, machine-recount results are due to the state by 3 p.m. on the ninth day following the general election, which is Thursday. Those are considered the “second unofficial results” of the election.

If Detzner determines that any of the races are within a 0.25 percent margin, he must order a manual, or hand, recount.

“The whole purpose of this is to look for voter intent. Just because a machine doesn’t see a vote doesn’t mean that human eyes won’t see a vote,” Earley said.

The results from the manual recounts, called “official returns,” must be provided to the state no later than noon on Nov. 18 --- 12 days after the election.

Two days later, the state Elections Canvassing Commission, comprised of Scott and two members of the Florida Cabinet, will meet at 9 a.m. in Tallahassee to certify the official election results.

Earley’s long-serving predecessor, Ion Sancho, said Florida’s law anticipates that it takes time for elections supervisors to finalize their vote tallies, hence the 12-day window before the results are finalized.

Ballots can be damaged in the mail or at home by voters before being sent to the elections office. Elections workers have to replicate the damaged ballots, so they can be read by voting machines, which then have to be examined by county canvassing boards, according to Sancho.

“Votes are not being manufactured out of nowhere. This is a process that a Republican legislature, a Republican governor and a Republican secretary of state have developed since 2002,” Sancho, who served as Leon County elections supervisor for nearly three decades before retiring two years ago, told the News Service.

Much of the current consternation about Florida’s election is focused on Broward County Supervisor of Elections Brenda Snipes, whose office was still processing ballots Friday. The results of those ballots were largely responsible for narrowing the gap between Scott and Nelson, whose lawyer, Marc Elias, predicted that the margin in the race would continue to evaporate as more provisional ballots are tabulated.

According to Snipes’ website, her office had not completed counting ballots that were cast during the early-voting period, which ended Sunday. But she has not said how many ballots remain outstanding, and she’s facing lawsuits from Scott and Matt Caldwell, a Republican candidate for agriculture commissioner who saw his 4,000-vote election-night lead reversed. By Friday afternoon, Caldwell’s opponent, Democrat Nikki Fried, held a 3,000-vote advantage.

“Certainly, there are hiccups here and there. It’s a very complicated process. When I start talking about how recounts work, or just tabulation in general, I always see people’s eyes roll into the back of their heads. But it’s those details that you’ve got to get right. Sometimes it takes time. I don’t think that anything nefarious is happening down south, but it may have been organized better,” Earley said.

Late Thursday evening, Scott told reporters he asked the Florida Department of Law Enforcement to investigate the elections offices in Broward and Palm Beach counties. FDLE is working with Detzner’s office and “will investigate any allegations of criminal activity or fraud,” agency spokeswoman Gretl Plesinger said in an email Friday afternoon.

“We do not have an active investigation at this point,” she said.

Broward voters have the power to do something about it if they are unhappy about their elected supervisor, Sancho said.

“The Broward County supervisor of elections, at age 72, was re-elected to another four-year term. The voters made that decision. They have to live with it. Votes matter. If people want the elections procedure to work better, then perhaps they should really look at the candidates who are running for supervisor,” he said.