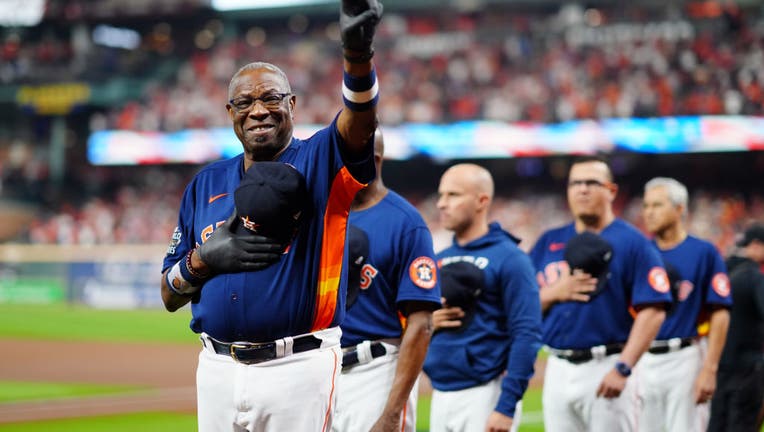 HOUSTON, TX - NOVEMBER 05: Manager Dusty Baker #12 of the Houston Astros looks on during the national anthem prior to Game 6 of the 2022 World Series between the Philadelphia Phillies and the Houston Astros at Minute Maid Park on Saturday, November 5

HOUSTON - Astros manager Dusty Baker has made World Series history after the team took home the championship in Game 6.

The Houston Astros have earned their second World Series, defeating the Philadelphia Phillies during Game 6. The last time the team won was in 2017 against the Los Angeles Dodgers.

At 73, team manager Baker has become the oldest MLB manager in history to win the World Series title. Even more, it's his first title win ever since becoming a manager in 1993.

Another history-making feat, Baker is the first MLB manager to go to the playoffs and win a division title with five different teams.

Baker helped lead the Astros to be undefeated in ALDS and ALCS. With more than 2,000 game wins on his resume as manager, this championship title is big for Baker.

Houston Astros manager Dusty Baker says he's only concerned about the present as the Astros take on the Yankees in ALCS Game 3.

Baker has a career for the books. He was a former outfielder for four MLB teams, playing for 19 seasons starting in 1968. He played for the Atlanta Braves, the Los Angeles Dodgers, the San Franciso Giants, and the Oakland Athletics.

Baker retired after the 1986 season, but quickly returned to baseball as a coach for the San Francisco Giants in 1988. He officially became a manager for the team in 1993 while also becoming the seventh Black manager to manage an MLB team.

Dusty Baker gets contract from Houston Astros for 2022

Dusty Baker will return as manager of the Houston Astros for a third season after agreeing to a one-year contract with the AL champions. FOX 26 Sports Director Mark Berman has more.

Baker has been managing MLB teams ever since with brief stints in between teams. He's worked with the Giants, Chicago Cubs, Cincinnati Reds, and Washington Nationals. He last managed for the Washington Nationals in 2017 before being hired on as the Astros manager in 2020.