"Homes for our Troops" providing new house for wounded veteran

Soon enough, a U.S. Army veteran who recently moved to Florida will have a new, accessible home for him and his family.

ORLANDO, Fla. - Soon enough, a U.S. Army veteran who recently moved to Florida will have a new, accessible home for him and his family.

Dozens of volunteers were out at the home Saturday laying sod and landscaping on the home, where U.S. Army Sgt. Chad Rozanski will live with his family.

"I never wanted to really get my hopes up too high and this is putting the cart before the horse, if you will. So it's really a dream come true at this point," he. Sgt. Rozanski served in Iraq and was wounded, losing his legs when his military vehicle struck a roadway bomb. After extensive time in rehab, he moved to Central Florida but was not able to find an accessible home to fit his needs.

"There were many attempts to make it suitable to where it was livable for me, but I've never had full access to everything," he said, "So, this is gonna be a game changer for me."

Homes for our Troops, a nonprofit organization, helped Rozanski, who qualified for the no-cost, custom-built home. 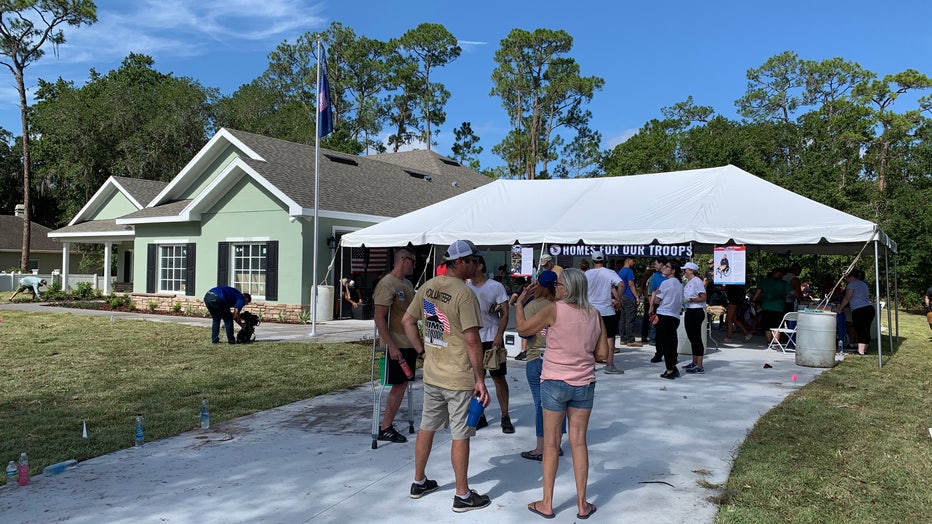 "We've been around for 18 years now, to date we've built 333 homes across 42 states, we have 81 projects underway, this is one of them. Another 100 veterans in the application process of our program, and there's a thousand more severely injured veterans that could qualify for our program," said Brig. Gen. Tom Landwermeyer, (Ret.), and CEO of Homes for Our Troops.

The house has more than 40 special features to accommodate wounded veterans, including lower countertops, fixtures, and applicants in the kitchen to accommodate wheelchairs. It's also a single-story home, has wider doorways, a fully-accessible shower, sinks, dual-climate zones, larger rooms, and a generator. He'll be able to move in at the end of August.

Patrick Wickens, a wounded warrior who lives in a home built by Homes for our Troops, was out there Saturday morning helping to get Sgt. Rozanski's home ready.

"Oh, it's been amazing," he said, "We've all been living comfortably, and just living the dream."

Tony Lindeman, who was also volunteering, said, "We try to give back a lot to the community through the company, and I think giving back to the community is really important to me as well, personally."