Port Orange police officers got nearly neck-deep in water as they rescued a woman who had driven her car off a flooded road into a canal.

PORT ORANGE, Fla. - Good Samaritans acted quickly with the assistance of Port Orange police officers after a pizza delivery driver ran off the road into a canal.

The incident happened Friday night after heavy rain associated with a Nor'easter brought flash flooding to portions of Flagler and Volusia counties.

The driver veered off a flooded road and into a canal next to Cedar in the Wood.

"She got a little confused and turned left directly into the canal because the water was level with the road," said Port Orange Police Sgt. William Harrison.

Luckily a neighbor called 911 and police came to the rescue.

Three Port Orange police officers responded to the crash and found that a woman was trapped inside the vehicle as it was sinking deeper into the water. The officers entered the water, broke the window, and pulled the driver out of the sinking car.

Good Samaritans were assisted by Port Orange police officers in rescuing a woman from a sinking car. 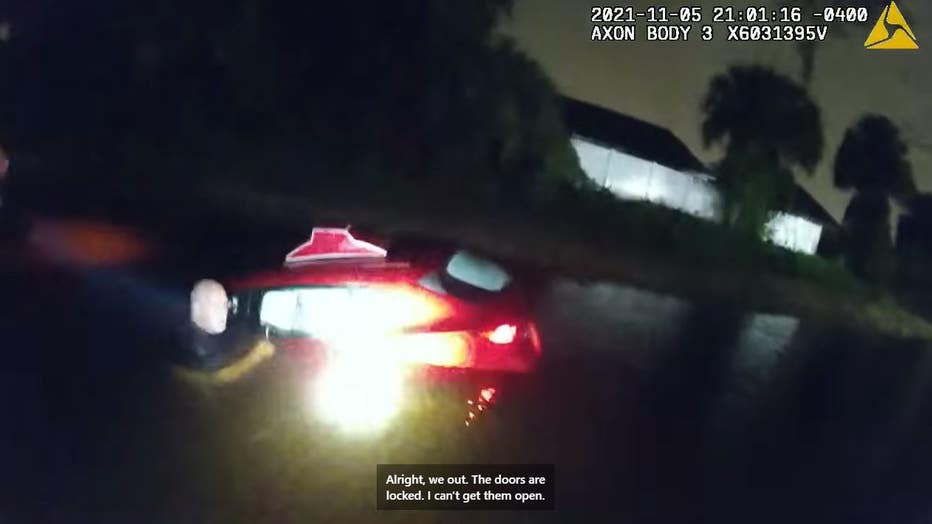 After breaking the rear window, the driver still could not escape. So they tried the side window. The driver inside was frightened and screaming, but suddenly the screaming stopped.

"She was all the way underwater," Sgt. Harrison explained.

Then she is pulled to safety, just in time, before most of the SUV goes underwater.

Sgt Harrison said one officer cut his arm on the window glass. He added that it can be extremely dangerous anytime officers go into the water, as victims are panicking.

"You’re dealing with moving water, wearing boots, vest, heavy gun belt. You’ve got 20-25 pounds of gear on you. It’s not the best environment for swimming."

Officers said the driver was checked out at the hospital but is okay.