MINNEAPOLIS (FOX 9) - With more than 4,100 National Guard soldiers and airmen moving onto the Twin Cities, state officials said Saturday police were in a stronger position to control unrest in the metro.

As the 8 p.m. curfew went into effect Saturday night, large crowds remained on the streets in Minneapolis. However, the situation quickly changed. 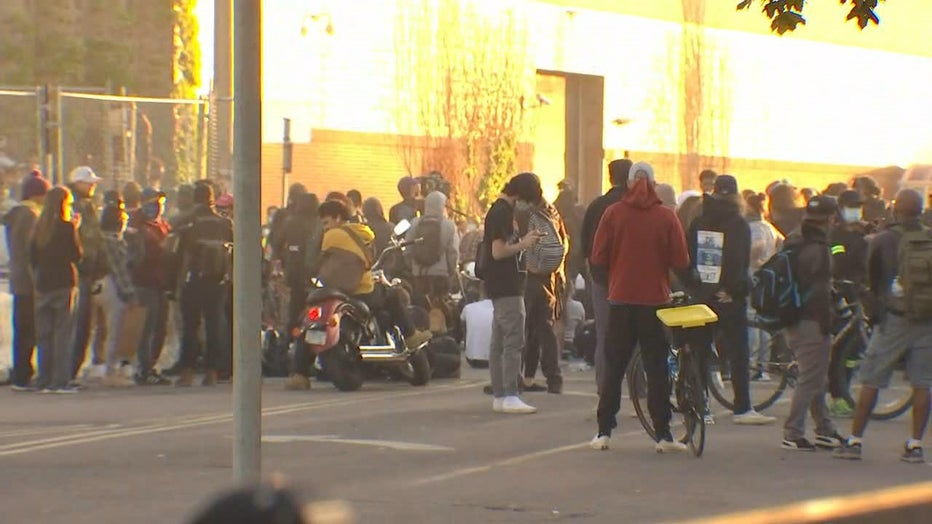 Around 8:45 p.m., officers began to fire tear gas, rubber bullets and flashbangs to disperse crowds near the Minneapolis Police Department's Fifth Precinct. Officers later said rioters had attempted to force their way inside the building but the police station had since been secured.

Minnesota Department of Corrections Commissioner Paul Schnell said early Sunday morning that police and soldiers were still working to clear smaller groups off the streets that had splintered from larger crowds earlier in the night.

With more than 4,100 National Guard soldiers and airmen descending onto the Twin Cities, state officials say they are in a better position to contain riots on Saturday

Schnell says police were working to determine exactly how many arrests have been made during the crackdown but say dozens have been taken into custody. However, he said there have been no serious injuries as a result of the situation.

Schnell says while the situation has improved, there is still a ways to go and it's likely the curfew will be extended for another night. But he adds that he believes the state is in a position to control the situation into the night.

He says he feels the night went significantly better due to more boots on the ground and clarity in terms of the state's mission as well as people complying with the curfew.

Minneapolis mayor and police chief give update on riot response

FOX 9 heard from Minneapolis Mayor Jacob Frey and Police Chief Medaria Arradondo as the state ups its response to unrest in the Twin Cities.

"We had incredible levels of compliance," said Schnell. "Even some of the protesters who remained at the Fifth Precinct, who just wanted to check it out. We believe they ultimately went home."

In terms of outside agitators coming in to cause problems, Schnell couldn't share any further insight. He said the state has information that certain outside groups have engaged in the protests but says it might be hard to tell exactly how many outsiders invaded the city.

The situation is looking better in St. Paul as the state cracks down on unrest in the Twin Cities

The remaining groups on the streets have broken down to parties of five or ten people before regrouping to larger crowds. Schnell says it appears some groups are organized and have been communicating throughout the evening.

Schnell says the state has not yet begun to scale back the operation. He says they are in it for the long haul until normal police operations can keep control.

Throughout the night, soldiers have stood guard at major sites in the Twin Cities, including a ring of crews around the state capitol.

On the cities' border, at the Lake Street/Marshall Avenue bridge, St. Paul police blocked the bridge and fired tear gas to prevent crowds from crossing into the city. After a confrontation, police say efforts were successful but the crowd ran before officers could make arrests.

Schnell said the state and local police worked to prevent groups from moving between cities.

At one point, police fired a projectile at a FOX 9 vehicle attempting to cover the dispersal efforts. Our crews weren't hurt, but the device damaged the vehicle's windshield. Media members are exempt from the curfew order.

Governor Tim Walz has promised a greater response on Saturday including National Guard soldiers, after three nights of chaos, fires, and looting. Speaking at a news conference late Saturday night, Major General Jon Jensen with the Minnesota National Guard said the state had plenty of resources in place and the state was in a "position of strength" to control crowds.

In a tweet, President Trump praised the work of National Guard soldiers in controlling the riots, saying officials should have done this two nights ago to stop the unrest.