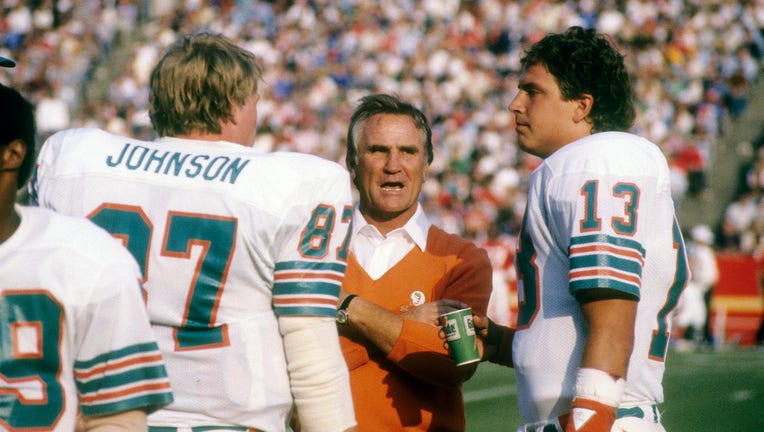 CIRCA 1980's: Head Coach Don Shula (C) of the Miami Dolphins in this portrait on the sidelines talking with tight end Dan Johnson #87 and quarterback Dan Marino #13 circa mid 1980's during an NFL football game. Shula coached the Dolphins from 1970-95

ORLANDO, Fla. - Miami Dolphins Coach Don Shula is being remembered by his colleagues and players. Shula passed away May 4, at age 90.

Shula famously led the Dolphins to a Super Bowl and the only “perfect season” recorded in the NFL, going 17-0 in the regular season and then winning the big game in a 14-7 victory over the Washington Redskins.

“In 1972, they're the first undefeated team in NFL history. It showed me he knew what he was doing and he could get the most out of you, but you had to trust in the process. Everything with him was about the process,” Moore said.

Shula also showed up on-air, at FOX35. The legendary coach discussed a bullying scandal that rocked the team in 2013. “I've taken a lot of pride in doing the right thing, having a good reputation, doing it the right way,” he’d said, “now, these things are coming on, that's all they're talking about. We want to get back in good standing and have people be proud of being Dolphin fans.”

Moore said even in his later years, Shula could always be found on the sidelines at the Dolphins games. “He was just that guy,” Moore said, “he didn't want to be in the way, but there if you needed him.”