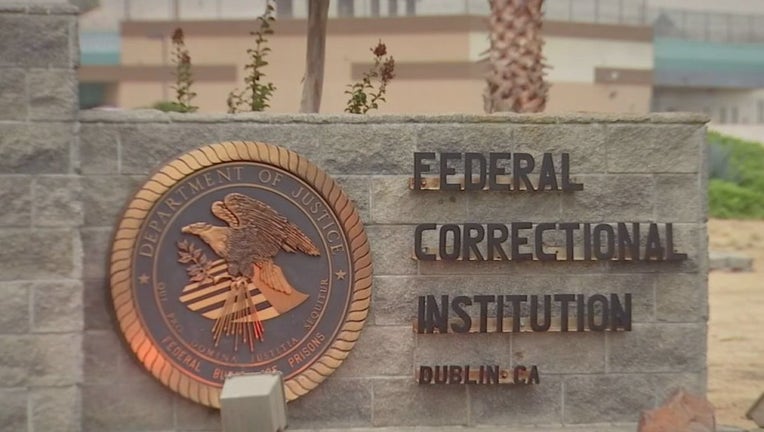 WASHINGTON - The Justice Department says it is gravely concerned about allegations that a high-ranking federal prison official entrusted to end sexual abuse and cover-ups at a women’s prison known as the "rape club" may have taken steps to suppress a recent complaint about staff misconduct.

Deputy Regional Director T. Ray Hinkle is accused of attempting to silence a female employee who said she had been harassed by a manager at the prison — the federal correctional institution in Dublin, California — by meeting with her personally in violation of established protocols.

"These allegations, if true, are abhorrent, and the Department of Justice takes them very seriously," the Justice Department said in response to questions from the Associated Press about Hinkle’s alleged behavior.

Hinkle, who pledged to staff that he would help Dublin "regain its reputation" during a stint as acting warden that ended this week, was also admonished by his bosses at the federal Bureau of Prisons for sending all-staff emails that were critical of agency leadership and policies.

In one email, Hinkle complained that he was unable to defend himself in an AP story last week about allegations that he bullied whistleblower employees, threatened to close Dublin if they kept speaking up about misconduct, and stonewalled a Congresswoman who sought to speak candidly with staff and inmates at the prison last month.

Hinkle didn’t respond to email and text messages seeking comment. He previously said that he was not authorized to speak with the media.

Four workers at Dublin, including a warden, have been arrested in the last eight months and charged with sexually abusing inmates. Several others are under investigation. FBI agents were at the facility Tuesday and Wednesday questioning inmates and staff.

The Bureau of Prisons says Director Michael Carvajal will visit Dublin soon. Members of Congress say they’re also planning to visit as they seek to push back against agency interference and increase oversight of the crisis-plagued federal prison system. The Justice Department said it will say more in the coming weeks about actions it is taking to combat abuse at Dublin.

Hinkle’s management of Dublin in the wake of the sexual abuse arrests — at a time when he was supposed to be rooting out misconduct and boosting morale — has only heightened scrutiny of the facility and eroded trust among staff, inmates and top officials at Justice Department and Bureau of Prisons headquarters in Washington D.C.

After receiving a copy of a memo the female employee wrote out detailing her alleged harassment, Hinkle called her into his office at Dublin and spoke with her one-on-one, people familiar with the matter told the AP. The woman felt blindsided and, after the meeting, was reluctant to proceed with her complaint, the people said. They were not authorized to speak about sensitive prison matters and did so on condition of anonymity.

The woman’s union had provided her memo to Hinkle, expecting that he, as the official in charge of the prison, would follow proper procedures to have her harassment complaint investigated. They expected him to respect her anonymity and did not anticipate he would attempt to speak to her on his own, the people said.

Under Bureau of Prisons policy, a warden who becomes aware of allegations of serious misconduct, such as sexual or workplace harassment, must report them immediately to the Office of Internal Affairs and must coordinate with that office before proceeding with an investigation.

Such matters are normally handled by trained investigators, not the warden. The policy also establishes protocols for interviewing with staff members about misconduct allegations, including ensuring that they have union representation.

"There are accountability mechanisms in place, whether through the Equal Employment Opportunity Office, the Office of the Inspector General, or even criminal prosecution, to ensure misconduct at all levels is met with the appropriate consequences," the Justice Department said.

Hinkle was named Dublin’s acting warden after a previous warden, Ray J. Garcia, was arrested on charges he molested an inmate and forced her and another inmate to strip naked as he took pictures — images prosecutors say were later found on his government-issued phone and personal laptop computer. Garcia has pleaded not guilty. Two other workers pleaded guilty in recent weeks.

An AP investigation last month revealed rampant sexual misconduct at the prison and detailed a toxic culture that enabled it to continue for years. After that reporting, which included accounts of inmates being sent to solitary confinement or transferred to other prisons to silence them, workers and union leaders at the Bay Area lockup and other federal prisons told the AP they too were being threatened for raising alarms about misconduct.

The Bureau of Prisons has been plagued by crises in recent years, many of them exposed by AP reporting, including criminal activity by employees, critically low staffing levels hampering responses to emergencies, the rapid spread of COVID-19, a failed response to the pandemic and dozens of escapes.

In a Feb. 24 email to Dublin staff after an AP story detailed allegations that he was bullying employee whistleblowers, Hinkle wrote: "I will continue to be as transparent as possible regardless of how it makes me look. It’s not about me. It’s about raising FCI Dublin to a new level of professionalism and correctional excellence. We must continue to serve with integrity and respect, and to have the courage to address wrongdoing."

But Dublin employees say Hinkle’s actions belied that message, and worked directly against the Justice Department’s efforts to reform the beleaguered prison. The Justice Department has said it has zero tolerance for sexual misconduct. A new warden, Thahesha Jusino, took charge of the Dublin prison on Monday. That change had been previously decided.

In a statement, the Bureau of Prisons said it "takes seriously our duty to protect the individuals entrusted in our custody, as well as maintain the safety of correctional staff and the community" and that allegations of misconduct are taken seriously.

She said the Bureau of Prisons was also "committed to fostering a workplace that is free of any type of harassment and will not tolerate harassing conduct by anyone in the workplace" and said employees who make harassment claims "will be protected against further harassing conduct or retaliation."

Hours after the AP reported on allegations that Hinkle was bullying employee whistleblowers, the acting warden emailed Dublin’s entire staff a link to the article and a warning that they were not allowed to speak to reporters or leak prison emails. He also accused officials at Justice Department headquarters of not letting him and others defend themselves.

"For reasons beyond my scope of understanding, we are not allowed to defend ourselves," he wrote in the message, which was obtained by the AP.

That email followed another message that Hinkle sent criticizing a California congresswoman who visited the prison earlier in the month. In that note, also sent to all Dublin staff, he accused Rep. Jackie Speier, a Democrat who sits on the House oversight committee, of "mistreating" officers at the prison during a visit she said was prompted by the AP’s reporting on sexual misconduct.

Speier told the AP that Hinkle repeatedly tried to block her from meeting privately with inmates, dismissed the allegations of sexual assault at Dublin as "an embarrassment" and then only allowed her to speak with inmates he picked out in a prison yard, in front of prison officials and other inmates.

"While the BOP promotes transparency between leadership and line staff, we are aware several emails did not reflect the expected standards of communication," Breshears said in response to questions about Hinkle’s messages. "We have addressed the issue.