FBI Director Chris Wray condemned the Jan. 6 riot at the U.S. Capitol in testimony before the Senate Judiciary Committee.

"As we work to safeguard our Nation, we must be vigilant in our efforts to identify and combat domestic violent extremism within both the broader community and our own organization," Mayorkas said. "Hateful acts and violent extremism will not be tolerated within our Department."

A team of senior officials will begin a detailed review about how to best prevent, detect and respond to threats related to domestic violent extremism within the DHS, a department news release said. 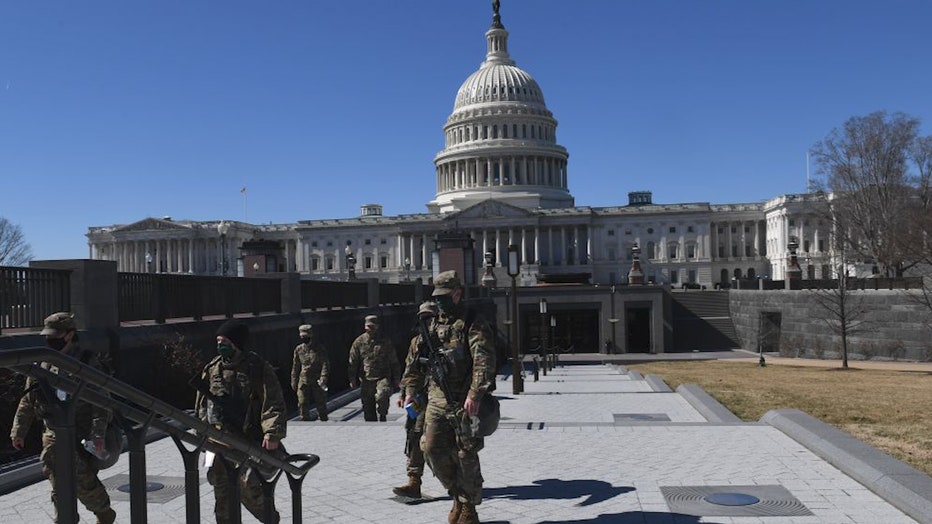 FILE - Members of the National Guard walk near the US Capitol Building on Capitol Hill March 3, 2021, in Washington, DC. (ERIC BARADAT/AFP via Getty Images)

The designated team will create a report about how to best identify and respond to threats based on "racially- or ethnically-motivated violent extremism."

Citing the Capitol riot that took place on Jan. 6, Mayorkas said, "Domestic violent extremism poses the most lethal and persistent terrorism-related threat to our country today," according to a Monday statement.

So far, more than 400 people have been arrested for their alleged roles in the riot. Five people, including a Capitol Police officer, died.

RELATED: Suspected Capitol rioter arrested after bragging about siege to a match on Bumble dating app

Apart from members of far-right extremist groups such as the Proud Boys or the Oath Keepers, included in the arrests were former members from all branches of the military except for the Coast Guard, former police officers, as well as a former Trump State Department aide Frederico Klein, who was accused of being part of the first wave of people that rushed the Capitol.

During a Senate Judiciary Committee hearing in March on the Capitol riot, FBI Director Christopher Wray labeled the pro-Trump insurrection "domestic terrorism" and warned of the growing threat of homegrown violent extremism that law enforcement is scrambling to confront through thousands of investigations.

Wray also defended to lawmakers the FBI's handling of an intelligence report that warned about the prospect for a violent incident on Jan. 6. Wray firmly rejected false claims advanced by some Republicans that anti-Trump groups had organized the deadly riot as Congress was gathering to certify results of the presidential election.

Wray’s testimony — his first before Congress in the wake of the pro-Trump riot — was one in a series of hearings centered on the law enforcement response to the Capitol insurrection. Lawmakers pressed him not only about possible intelligence and communication failures ahead of the riot but also about the threat of violence from White supremacists, militias and other extremists that the FBI says it is prioritizing with the same urgency as the menace of international terrorist organizations.

In quantifying the scale of the FBI’s work, Wray said the number of domestic terrorism investigations has increased from around 1,000 when he became director in 2017 to roughly 1,400 at the end of last year to about 2,000 now. The number of arrests of white supremacists and other racially motivated extremists has almost tripled, he said.

"Jan. 6 was not an isolated event. The problem of domestic terrorism has been metastasizing across the country for a long time now and it’s not going away anytime soon," Wray told lawmakers at the March hearing. "At the FBI, we’ve been sounding the alarm on it for a number of years now."

The DHS has initiated a number of safeguards in a bid to stave off any further domestic threats including a National Terrorism Advisory Bulletin issued on Jan. 27 and a designated grant that requires state, local, tribal and territorial governments to spend at least 7.5%, or a minimum of $77 million, of DHS grant awards combating terrorism and other disasters, according to the department.

"In the coming days, DHS leadership will communicate additional information and guidance to you. This guidance will include information about Department and Component-specific policies and procedures laying out the requirements and mechanisms for reporting insider threats and other actions associated with domestic violent extremism," Mayorkas said in a memo to his colleagues Monday.

Similarly, the Pentagon is developing ways to better screen military recruits for extremist behavior, while improving training for troops leaving the service so they can be more prepared if violent hate groups lure them to join.

RELATED: Former Utah police officer arrested for alleged role in Capitol riot after someone tipped off the FBI

Defense Secretary Lloyd Austin released a memo earlier this month that ordered some new, immediate steps the department will take, as well as longer-term efforts aimed at rooting out extremism in the ranks and clarifying how personnel can better identify and report problematic behavior.

The military has long been aware of small numbers of White supremacists and other extremists in its ranks. But Pentagon leaders launched an all-out effort to address the problem after it became clear that a significant number of military veterans and some current military members were present at the Jan. 6 insurrection.

"The vast majority of those who serve in uniform and their civilian colleagues do so with great honor and integrity, " said Austin in the memo. "But any extremist behavior in the force can have an outsized impact."