Some business owners left cleaning up the damage of violent protests are calling for justice for Floyd.

LOS ANGELES - As protests over the Minneapolis police killing of George Floyd have led to smashed windows and looting in cities across the country, some business owners have been left to clean up the damage while still calling for justice in Floyd’s death.

Tens of thousands of people have taken to the streets in peaceful demonstrations against Floyd’s death and other police killings of black people. But in more than 20 U.S. cities, thieves smashed their way into businesses and ran off with boxes of sneakers, clothes, cellphones and other electronics.

In Los Angeles, damage from weekend violence included windows shattered at nearly every shop along a stretch of trendy Melrose Avenue. 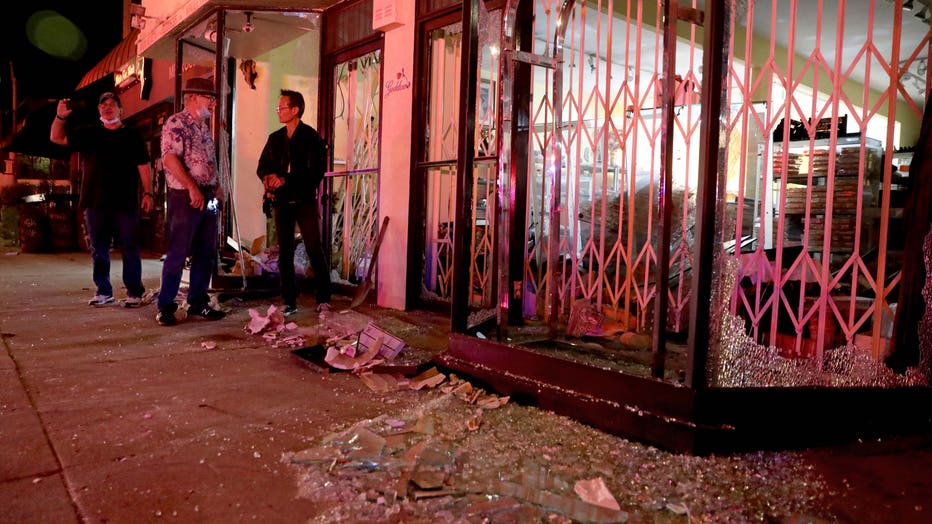 Shop owners assess the damage after looters and vandals ransacked businesses along Melrose Ave. in the Melrose District on May 30, 2020 in Los Angeles, California. (Gary Coronado / Los Angeles Times via Getty Images)

Video on social media showed people breaking into Cookies Melrose, a cannabis dispensary, and making off with product. But the brand’s CEO and part-owner, rapper Berner, said he is more concerned with injustice than damage to the storefront.

"It’s extremely unfortunate what happened to our store tonight on Melrose. But as a human living in the world we’re living in today, I can’t expect anything less until justice is served," Berner said in a post on the store’s Instagram. "We can rebuild our store, but you cannot bring someone back to life. With that being said, we stand with what’s going right now in the world. A statement needed to be made. All I say is, I pray everyone stays safe and protects their family in a time like this. How can I worry about a store when there’s so much more going on in the world right now? So much hate, so much anger, so much pain and a lack of justice."

RIF LA, a California sneaker and clothing consignment shop, echoed a similar sentiment on Twitter after looters broke into both its Los Angeles and San Francisco locations.

"I’m not even mad. God has a bigger plan and I know this is bigger than anything that we (lost). What happen to George Floyd should have never happen. Praying for better days for all of us and especially for the black community. They need our support more than ever," the company wrote.

Sneaker and apparel company Undefeated said one of its Los Angeles stores, "which has served as a pillar in the community, driving youth and adult programs for almost 20 years," was hit by unruly demonstrators.

"We’re not going to allow opportunists to change the narrative," Undefeated said in an Instagram post. "We’ll clean up, rebuild and will continue to demand justice and equality in our communities that need it the most."

In major U.S. cities, people took to the streets to protest the death of George Floyd.

The Candle Lab, a make-your-own candle shop with locations in Cincinnati, Columbus and Pittsburgh, called for change in a poignant post on Facebook after several of its shops were hit.

"Several of our stores were damaged in the protests over the past couple days. It's fine - it's a very small inconvenience that won't hurt us or our company. It's also the price we pay for staying silent on issues that are too important to ignore. We don't blame the protesters - this is the only voice they have to express their frustration with a completely unacceptable situation," the store wrote in part on its Facebook page.

"We'll keep replacing store windows for as long as it takes for those in power to understand this has to change NOW," the store concluded.

Other shops, such as Attom in Atlanta, similarly shared the pain of those protesting Floyd’s death — but said damaging and stealing from businesses would not prevent such injustices from occurring in the future.

"THIS IS NOT THE ANSWER," the store wrote on its Instagram account. "We send our condolences to other black owned businesses around the country who have been a victim to such activity."

Attom co-owner Kris Shelby told the New York Times that Floyd’s death "seriously hurt, but as a black man, and this is a black-owned business, it’s just sad. It really leaves a bad taste in our mouths, to be honest."

At least 4,400 people have been arrested over days of demonstrations since Floyd’s death on May 25. City and state officials deployed thousands of National Guard soldiers, enacted strict curfews and shut down mass transit systems to slow protesters’ movements.

But amid the chaos, many residents also came together to clean up the damage in their communities. Volunteers swept up broken glass outside of Round Two, a popular vintage clothing store in Los Angeles, while others gathered in Grand Rapids, Michigan, to clean graffiti.

"My heart is lifted as I make my way through downtown with hundreds of people helping clean up our city," Grand Rapids Mayor Rosalynn Bliss wrote.

In Minneapolis, the officer who pressed his knee onto Floyd’s neck has been charged with murder, but protesters are demanding the other three officers at the scene be prosecuted. All four were fired.

"We’re not done," said Darnella Wade, an organizer for Black Lives Matter in neighboring St. Paul, where thousands gathered peacefully in front of the state Capitol as state patrolmen and National Guard soldiers lined up in front of about a dozen military-style armored vehicles. "They sent us the military, and we only asked them for arrests."