WEST PALM BEACH, Fla. - Despite glowing reviews for the way Florida runs them, Governor Ron DeSantis is urging state lawmakers to take an extra step to ensure the security of elections. He wants them to create a state office dedicated solely to investigating election crimes.

Though state officials have found no evidence of fraud in recent elections, DeSantis said this will make it even less likely.

DeSantis was met with cheers from supporters in West Palm Beach Wednesday after calling on lawmakers to establish an Office of Election Crimes and Security within the Department of State.

After a heckler interrupted Gov. DeSantis, others in the crowd respond with chants of "Let's go Brandon" and "We love Casey" as deputies remove the man.

"We will have sworn law enforcement officers as part of this, we'll have investigators, we'll have the statewide prosecutors that are able to bring the cases," DeSantis said.

He wants "ballot harvesting" to become a third-degree felony. That's when third-party operatives drop off many ballots they've collected.

"The first person that gets caught, no one's going to want to do it again after that, because they know that there's going to be enforcement," DeSantis said. 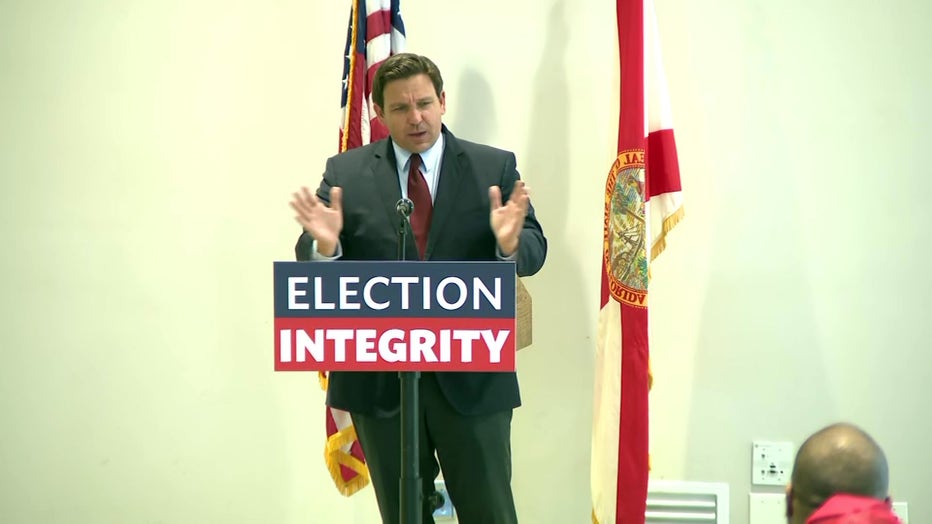 DeSantis also wants to give supervisors of elections deadlines to clear voter rolls of ineligible voters and to prohibit what he calls, "un-secure, haphazard" dropbox locations, although he signed a bill in 2019 authorizing them.

"These are supposed to be secret ballots," DeSantis said. "You're supposed to vote. When you go in, that's why they do it private, it's like a solemn thing to vote in person. But then you have these mail ballots and somehow you can have someone have a stash of 50 ballots, that's just not right."

However, audits by Florida's 67 supervisors of elections found no evidence of widespread voter fraud in recent elections, including no reports of "stashed" ballots.

Still, the GOP-controlled Legislature took it one step further in the spring, passing restrictions on vote-by-mail ballots and ballot drop-off boxes, and stricter voter ID laws.

Last month, Florida's supervisors of elections sent a memo asking elected officials and candidates to quote, "tone down the rhetoric," saying that "false claims of fraud do not strengthen our elections.

"Instead, they degrade confidence in the institutions, and discourage citizen participation in our democracy."

Opponents contend the law is designed to suppress voting by groups such as African Americans, who vote heavily for Democrats. Legal challenges are pending in federal court.

The Lake County Republican Party, for example, has approved a resolution calling for a full audit of the 2020 elections. Also, conservative operative Roger Stone, a longtime ally of former President Donald Trump, said on social media he would consider running for governor in 2022 if DeSantis continues to refuse to order an audit.

Speaking in West Palm on Wednesday, Florida Gov. Ron DeSantis refers to the Biden Administration as the "Brandon Administration." As the crowd chants "Let's go Brandon," the governor explains his version of the origins of the phrase.

"If Florida governor Ron DeSantis does not order an audit of the 2020 election to expose the fact that there are over 1 million phantom voters on the Florida voter rolls in the Sunshine state, I may be forced to seek the Libertarian Party nomination for governor (of) Florida in 2022," Stone posted on the social-networking service Gab.

Last month, Florida Secretary of State Laurel Lee told lawmakers the state has already conducted an audit of the 2020 elections. Trump easily won in 2020 in Florida, though he lost nationally to Democrat Joe Biden.

"We have already completed an audit of all 67 counties," Lee told the Senate Transportation, Tourism and Economic Development Appropriations Subcommittee on Oct. 13. "And that audit demonstrated an exceedingly high level of election integrity and, again, demonstrated that our results were accurate, reliable."

On Wednesday, the Division of Elections posted a video of Lee reiterating, "Florida’s election in 2020 was accurate, transparent, and conducted in compliance with Florida law."