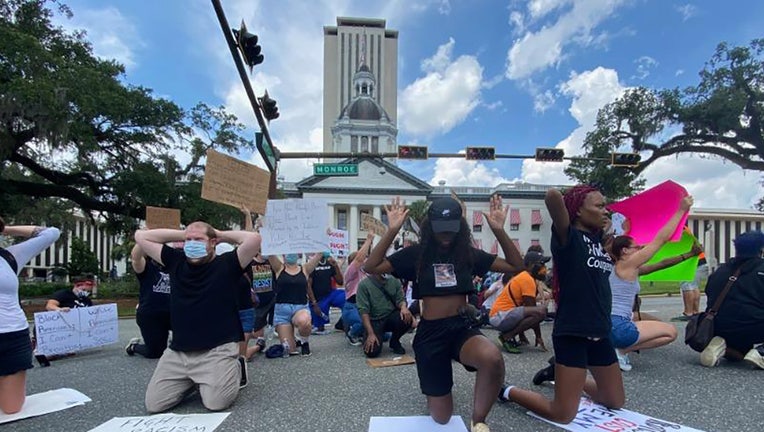 Protests outside the Capitol in Tallahassee (NSF photo)

TALLAHASSEE, Fla. - For the first time since a string of protests erupted in Florida against police brutality, Gov. Ron DeSantis late Monday afternoon said the state has “zero tolerance for violence, rioting and looting.”

“George Floyd’s murder was appalling, and the Minnesota perpetrators need to be brought to justice, but this cannot be used as a pretext for violence in our Florida communities,” the governor said in a prepared statement, referring to the Minneapolis man whose death touched off protests across the country.

Floridians did not hear from DeSantis during a violent and chaotic weekend marked by demonstrations in various parts of the state.

DeSantis was quiet as thousands of protesters flooded city streets, seething over the death of Floyd, a black man killed in police custody under a white officer’s knee.

In Miami, squad cars were damaged and police fired tear gas at a crowd of protesters. In Tallahassee, the driver of a pickup truck plowed through a street packed with demonstrators, just blocks from the state Capitol building.

In Jacksonville, Sheriff Mike Williams said protesters “attacked several police officers,” including one who was hospitalized after being “slashed at the neck.” In Fort Lauderdale, a police officer was suspended after he was caught on video aggressively pushing a kneeling woman to the ground.

The view from several locations where protests turned violent in the north Tampa area.

It wasn't until Monday afternoon that DeSantis’ office issued his statement about the upheaval.

“We have devoted significant resources, including the mobilization of 700 Florida National Guard soldiers who are specially trained to support law enforcement,” DeSantis said.

The governor said he is also working with the Florida Highway Patrol to coordinate more than 1,300 sworn troopers to support local law enforcement efforts.

“We will continue to do everything necessary to keep residents safe,” he said.

The statement came a few hours after President Donald Trump urged state leaders to "dominate" and arrest disorderly protesters during a conference call, according to a recording made public by The Washington Post.

While DeSantis spokeswoman Helen Aguirre Ferre confirmed DeSantis took part in the call, she declined to comment on the call’s contents.

But Trump was clear on his message to governors. He told them to use force against demonstrators and that people arrested at protests should serve between five and 10 years in prison, according to the recording.

"We have to get much tougher," Trump said. "If you don't dominate, you're wasting your time. They are going to run over you, and you're going to look like a bunch of jerks."

On the conference call, Trump also urged states to deploy the National Guard "in big numbers." DeSantis activated the guard on Saturday, according to Ferre.

The governor’s public schedule on Sunday suggested DeSantis talked with state police on how to respond.

For example, DeSantis met Sunday morning with Florida Department of Law Enforcement Commissioner Rick Swearingen in the Capitol, according to the schedule. The details of what was discussed have not been disclosed.

The governor’s office and FDLE did not immediately respond to questions Monday from The News Service of Florida.

Susan MacManus, a longtime political-science professor at the University of South Florida, said that historically in times of crisis “people want to see leaders in the community, the state and the nation come out and ease their concerns and reassure people.”

"The longer you wait to make a statement the more people begin to question why," she added.

Democrats criticized DeSantis for how he handled the situation.

“Unless I missed it --- Gov. Ron DeSantis has said NOTHING about protests against police brutality happening across the country & state this weekend. He activated Florida’s National Guard so is definitely aware, and yet NO statement,” Rep. Anna Eskamani, D-Orlando, tweeted Sunday night.

Other Florida Republican leaders, meanwhile, commented on the protests, looting and Floyd's death.

“The killing of George Floyd was heinous & jarring. Americans have the right to make their voices heard & protest peacefully. But violence against law enforcement & our communities are not the answer. We must come together as a state & a nation, not tear each other further apart,” U.S. Sen. Rick Scott, Florida’s former two-term governor, tweeted on Saturday.

U.S. Sen. Marco Rubio, R-Fla., on Monday tweeted that he was concerned about anti-government “extremists who are online calling for attacks on police.”

“Sadly, instead of focusing on the core issues raised by his (Floyd’s) tragic death, the focus is on the violence & lawlessness at protests,” Rubio tweeted. “That must end.”

State Rep. Anthony Sabatini, R-Howey-in-the-Hills, made headlines for a tweet that featured a camouflage AR-15 and a warning to protesters in Lake County, part of which he represents in the House.

“Attention potential ‘protesters’ coming near Lake County, FL. This is an AR-15 --- this will be a very common sight upon illegal entry at any Lake County business --- FYI!” Sabatini tweeted on Sunday.

Rep. Cindy Polo, D-Miramar, filed a complaint Monday against Sabatini with House Speaker Jose Oliva, R-Miami Lakes, arguing the tweet violated the rules of the House for exhibiting “behavior that is contrary to good order and discipline.”

“Especially during times of crisis, people look to our elected officials for leadership and guidance. By intimating that protesters would be met with an AR-15, Rep. Sabatini is openly calling for violence,” Polo said in a statement.